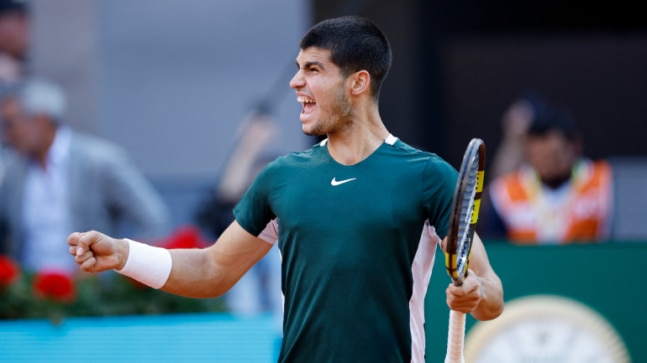 19-year-old Spanish tennis star Carlos Alcaraz has been on an absolute rampage of late, having defeated Rafael Nadal, Novak Djokovic and Alexander Zverev in succession.

Spain’s tennis star Carlos Alcaraz has set his goals clear, saying that he wants to take his game a notch up and win a Grand Slam. On Sunday, May 8, the 19-year-old defeated Olympic gold medalist Alexander Zverev 6-3, 6-1 in the men’s singles final to win the Madrid Open.

Prior to that, the Young Turk made the world sit up and take notice after beating World No.1 Novak Djokovic and ‘King of Clay’ Rafael Nadal. Having beaten the duo, Zverev is high on confidence and said that he has played his best tennis over the last seven days or so.

Currently ranked No.6, Alcaraz churned out his best Grand Slam performance last year after he reached the quarterfinal of the US Open at Flushing Meadows. After coming out trumps in the Madrid Open, Alcaraz is set to ply his trade in the Italian Open and will play his first game on Tuesday, May 10 against Chile’s Cristian Garín.