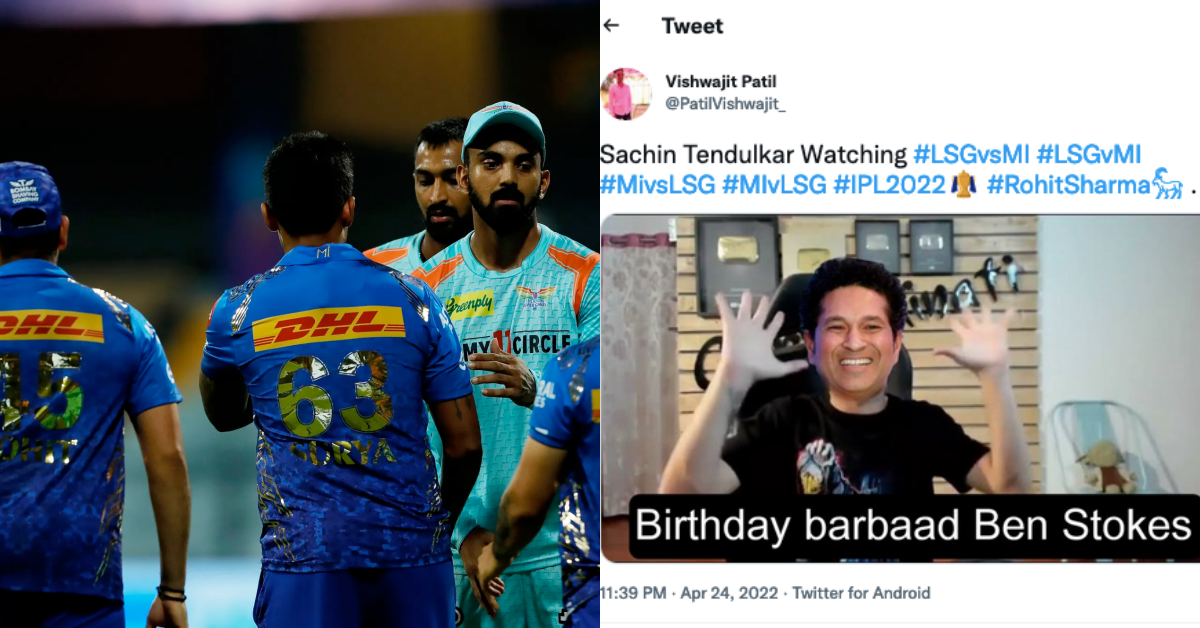 Lucknow Super Giants (LSG) rode on the back of their skipper, KL Rahul’s second century of the season against Mumbai Indians (MI) to subject the 5-time champions to their eighth defeat in a row in the IPL 2022 season.

Batting first, LSG lost Quinton de Kock early but Rahul and Manish Pandey built a 58-run partnership to offset the early damage. While the others struggled, Rahul looked at ease on a track that is a good batting surface.

The Lucknow skipper, who is the only one even remotely keeping in touch with the orange cap leader, Jos Buttler, smashed 12 fours and 4 sixes in his 62-ball 103. The next highest contribution was from Manish, who scored a run-a-ball 22.

In response, the weak Mumbai batting lineup’s frailties were exposed again. Rohit Sharma played well as he got himself to another start but Ishan Kishan at the other end had a horrible time.

Kishan played 19 balls to score 8 runs before Ravi Bishnoi ended his misery. After looking good for a while, Rohit departed for 39 but the biggest damage was inflicted by Ayush Badoni.

He dismissed the in-form batter, Suryakumar Yadav, to pick up the first wicket of his IPL career. The impressive Tilak Varma fought hard for his 27-ball 38 which kept MI in the run chase but they ended up falling well short of the target.

In the end, the loss was Mumbai’s 8th in a row this season, extending the record for the worst start to an IPL season. They are virtually out of the playoff race and will be looking to reduce the humiliation going forward.

In a match where no one could touch 40, @klrahul11 scored a fine hundred which was match winning knock. Well played! #MIvsLSG #CricketTwitter

I’ve never supported @mipaltan in a game because of my love for @ChennaiIPL but you gotta feel for them right now.
This is not how champion teams Shd go down… #MIvLSG #IPL2022

pls don’t be sad Ro ❤️, We can’t see u like this !! 🥺#RohitSharma pic.twitter.com/F30LrfRrbL

With qualifying chances all but over, MI fans rest of the IPL: #LSGvMI #IPL2022 pic.twitter.com/U9Erw3jOBm

Maybe time for @mipaltan to ‘play the kids’ for the rest of the #IPL. Give their young, local players a chance. Nothing to lose, and things couldn’t get any worse. #IPL2022 #MIvLSG #LSGvMI #MumbaiIndians 🇮🇳🏏

A kiss on the head by Krunal Pandya to Kieron Pollard #IPL2022 #LSGvsMI #MumbaiIndians pic.twitter.com/duJLwzRaAA

Lucknow brilliant in defending 168. Promising start by #Rohit, but innings imploded under pressure from LSG bowling, that said most Batsmen dismissed playing poor shots. 8 defeats and not a single win so far this season for #MumbaiIndians. Staggering!

Delighted to see the form Chameera is in. I believe he is among the best in T20 cricket at the moment