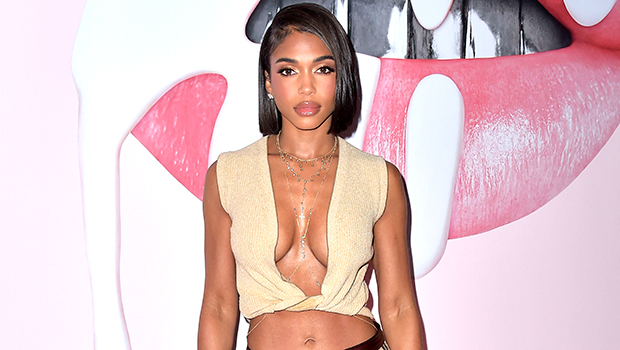 Lori Harvey’s social game is still strong, 12 weeks past her breakup with Michael B. Jordan! The gorgeous daughter of Steve Harvey was seen attending Kylie Jenner’s cosmetics bash on Wednesday, August 24, rocking a short, sleek bob and a plunging, belly-baring beige crop top! The model, 25, paired the jaw-dropping top with layered necklaces, diamond stud earrings, and animal print pants. Her glam makeup was on point as she was snapped at the soiree looking completely unbothered by the early summer breakup drama.

Lori and the Black Panther actor, 35, parted ways in early June after dating for more than a year. A source told HollywoodLife at the time that their friends were “stunned” by the abrupt separation. “Lori and Michael’s friends were stunned when they found out they had broken up, the source told HL EXCUSIVELY.  They felt like they were the perfect couple and they can’t believe they’ve decided to go their separate ways. It’s really sad because everybody thought they were so adorable together and seemed so in love.”

The photo-perfect duo began dating in November of 2020, and the romance escalated quickly. So too did their split, as Michael erased all photos of Lori from his Instagram account a couple of weeks after the breakup. HollywoodLife‘s source confirmed in the June comments that Michael was “upset” by the split.

“Michael is so upset right now because he saw himself spending the rest of his life with Lori,” they said. “He can’t believe this is how things ended and knows this is hard on both of them.” Lori, however, continued making gorgeous appearance after gorgeous appearance following the sad news.

The model posted a breathtaking photo of her wearing a hooded maxi dress, also on August 24, and left no question as to how she’s feeling after the breakup. “Me Time,” she pointedly captioned the Instagram post.