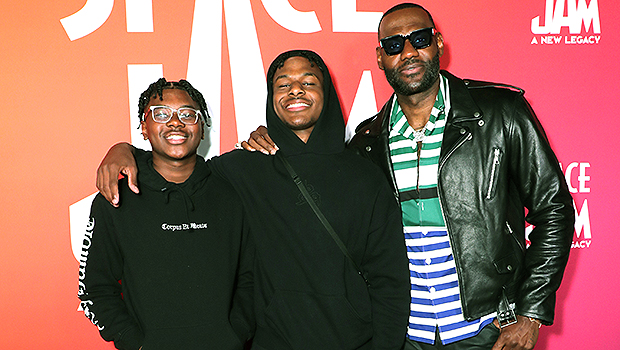 Like father, like son! LeBron James was featured alongside his sons Bronny, 17, and Bryce, 15, on the cover of the October issue of Sports Illustrated, released on Tuesday, August 30. The three James men looked like an incredibly happy family as they posed for the photos, which you can see here. The NBA star, 37, admitted that he was hoping that he could continue his pro basketball career long enough to someday play in the league alongside his sons someday.

For the cover photo, LeBron rocked a black tank, which featured his 2002 S.I. cover story titled “The Chosen One,” which was written when he was still just a high school player. As he stood between Bronny and Bryce, it’s impossible not to notice just how much the two boys look like their dad. Bronny sported a sleeveless, white hoodie and blue shorts, while his younger brother wore a black tee and green shorts. While all three looked tough for the cover photo, the story also featured photos of the basketball star smiling alongside his sons, plus the three of them practicing together.

The NBA player hasn’t been shy about speaking about wanting to play alongside Bronny, and they would be the first father and son to play in the league at the same time ever, and he’s said that he regularly puts his wishes into the universe. “I’ve always set out goals in my career, talked to the basketball gods, and they’ve listened to all of them. Hopefully they can listen to this last one, too,” he explained.

LeBron opened up about wanting to stretch his career to be able to play at the same time as his kids. He said he monitors what team will have the first draft pick when they become eligible. “I feel like I could play for quite a while. So it’s all up to my body, but more importantly, my mind. If my mind can stay sharp and fresh and motivated, then the sky’s not even a limit for me. I can go beyond that. But we shall see,” he said.

The NBA star’s wife Savannah also revealed LeBron’s hopes aren’t just that the boys are in the NBA at the same time as their dad, but may also be more. “Of course Dad is wanting [Bronny] to play on the same court eventually, maybe on the same team. That would be the icing on the cake for his career, and probably [as] a father,” she said.

LeBron isn’t the only one looking forward to hitting the court with his kids. Both Bronny and Bryce explained that they’re avid players. “My dad is cool enough to let me take whatever path I want if I wanted to not pursue basketball. But I think basketball is going to be my thing, for sure,” Bronny said. Writer Chris Ballard noted that the younger James son seemed less confident about his shot at the NBA. “I’ll see what happens. I’m going to be playing basketball. If [I] go down that path, then it is what it is,” Bryce told the outlet.

LeBron James’ Wife Savannah: 5 Things To Know About Her & Their Marriage

It was also made clear that the Lakers forward hasn’t forced his kids to follow in his footsteps. Besides Bronny and Bryce, the LeBron and Savannah also have a daughter Zhuri, 7, but the player revealed that she hasn’t shown interest in playing basketball like her brothers.