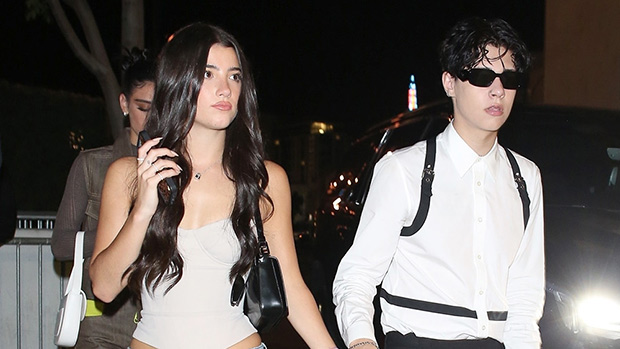 Young love! Landon Barker and Charli D’Amelio looked super cute as they walked into the Kylie Cosmetics Ulta Beauty launch party on Wednesday, August 24. The pair were both dressed amazingly for the special event, with the couple holding hands as they arrived. The TikToker and musician, whose dad is Travis Barker, looked like they had a blast at the party.

Charli, 18,  kept her look casual, as she sported baggy pair of jeans and a beige tube top. She carried a black purse along with her, as she held her boyfriend’s hand. Landon, 18, looked suave as he sported a white button-down and black slacks, with matching suspenders. He also embraced some of his dad’s signature punk rock fashion, as he donned a pair of black dress shoes with silver spikes at the front.

Arriving alongside the couple was Charli’s older sister Dixi, 21. She sported dark gray denim vest and matching pants with thigh-high orange boots. She also rocked a turtleneck crop top underneath the vest. The couple posed with Dixi and another friend, who wore all-black for a photo once they were inside the party.

The couple has been going strong since it was first reported that they were together back in June. Since their relationship went public, the pair hasn’t been shy about showing off PDA, whether it’s holding hands while walking around New York City or the pair posting a photo of themselves kissing on their social media. Apparently, the young stars are head over heels for each other. An insider revealed to HollywoodLife exclusively that they’re feeling the love, especially after Landon had “crushed” on her for a long time. “Things are really new for them both and even though they’re young, they have agreed they want to take things slow despite the strong feelings they have for one another,” they said.