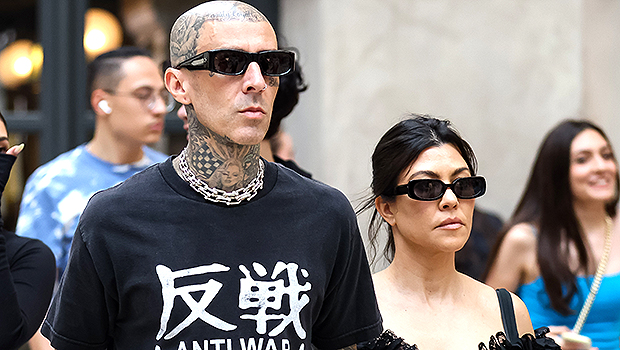 Kourtney Kardashian and Travis Barker‘s engagement should have been about them — but according to the new bride, an edit on Hulu’s The Kardashians placed far too much emphasis on the potential angst of Kourt’s ex, Scott Disick. Kourtney, 43, spoke out while chatting with family friend Stephanie Shepherd, per TooFab, saying that the couple didn’t appreciate having “drama” around them during the filming of the episode that included their romantic oceanside engagement.

“We film and have the best time ever and we’ve been watching the edits and we’re just so annoyed because they’re swirling us in with this drama,” Kourtney told Stephanie. “Especially when I saw my engagement episode. Editors or whoever are taking it as, ‘Let’s take Kourtney, she’s the chosen one to be the drama.’”

Kourtney’s episodic confessional clarified that the Kardashian sisters are executive producers on the family’s new Hulu series, which gives them early screening privileges in order to ensure “our stories are being told.” But the couple was unhappy after watching the engagement episode, feeling that momentary concern for Scott co-opted their moment, as a flashback to the episode showed Kendall Jenner asking if Kourtney had any worries about Scott’s feelings, as he had been feeling left out.

That night I wasn’t like, ‘God, everyone’s such f—ing assholes for bringing up this,’ because it wasn’t a part of the night, it was like two seconds of the night. I didn’t even remember it until I saw the cut of the episode,” Kourtney continued to Stephanie. “It wasn’t like 50% of the night like it’s made to be on an episode.” The reality icon went so far as to say she wishes they’d take the overblown moment out.

“I wish they would take that out and put in the next episode, give us our respect, so it’s like, let us have our moment,” she exclaimed. “I’m like, why is the fairytale not being told? The true fairytale that it is. I don’t want to be insensitive. It is all good, we’ve been broken up for seven years. I’m allowed to create new memories and new ways of doing things.”

The Poosh founder lamented how the edit emphasized an “old” narrative involving the father of her three children Mason, Penelope, and Reign. “It’s enabling this old narrative and buying into something that doesn’t exist,” she explained. “It should be an empowering episode about me getting out of toxic relationships and really having this fairytale love story that is my reality.”

While it may have annoyed Kourtney and Travis, it certainly didn’t take away from their overall joy, as the couple famously wed on May 22 in a lavish Portofino, Italy ceremony after a practice run in Las Vegas and a legal ceremony in Santa Barbara, California.