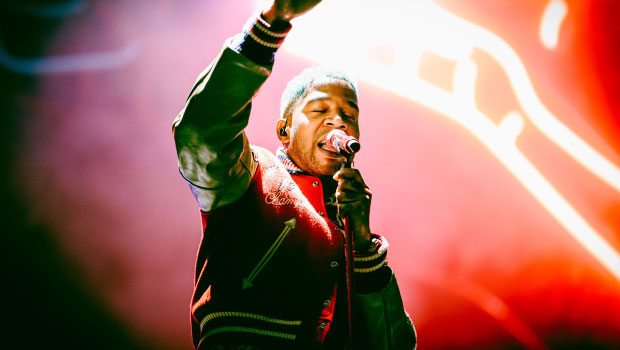 Kid Cudi wasn’t having it on Friday night, July 22 at the Rolling Loud Festival in Miami. The Cleveland rapper/actor dramatically walked off the stage halfway through his headlining performance after being pelted with water bottles and other debris. Shortly afterwards, Kanye West, who dropped out of the event less than a week earlier, made a surprise appearance during hip hop star Lil Durk’s set.

Cudi gets hit and walks off stage at #RollingLoudMiami pic.twitter.com/2sg8tmBGiS

Video footage posted by fans online (above) shows Kid Cudi standing at his microphone and singing as a water bottle is launched from the audience, hitting the X alum in the face. He immediately stops performing and addresses the crowd with a fiery message. “I will f***ing leave. If I get hit with one more f***ing thing — if I see one more f***ing thing on this f***ing stage, I’m leaving,” Kid Cudi taunts the rowdy fans. “Don’t f** with me.” After more garbage is tossed onstage, the entertainer calmly turns around and exits the stage at the Hard Rock Stadium.

As more garbage was tossed onto the festival stage, chants from the crowd for Kanye to appear began to fill the venue, according to Rolling Stone. The “Famous” rapper eventually showed up after Lil Durk announced his as a special guest during his performance. Kanye would go on to sing “Father Stretch My Hands Pt. 1,” which features vocals from Kid Cudi.

Kanye West Then & Now: Photos Of The Rapper From His Young Days To Superstardom

The move by Kanye was notable as he and Kid Cudi had a very public falling out recently. After Kanye called Kid Cudi out on social media for being chummy with comedian Pete Davidson, who is dating Kanye’s ex Kim Kardashian, Kid Cudi clapped back, saying he would never work with Kanye again. “You’re whack for flipping the script and posting this lie just for a look on the internet,” Kid Cudi posted on Twitter in February. “You ain’t no friend. BYE.” He also called Kanye a “dinosaur.”

Meanwhile, Kid Cudi had taken Kanye’s place as headliner at Rolling Loud after the Grammy winner unexpectedly pulled out for unknown reasons. Rolling Loud co-founders Tariq Cherif and Matt Zingler released a statement at the time, saying they had worked with Kanye for months on his festival appearance. “Unfortunately, Ye has decided that he will no longer be performing,” they added in the statement. “This is the first time a headliner has ever pulled off our show and though we don’t take it lightly, we wish him the best.”