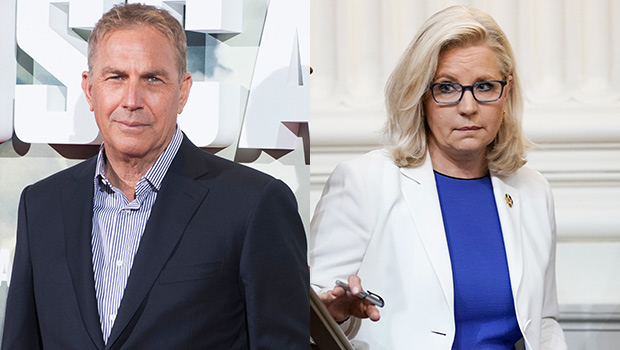 Wyoming Republican Liz Cheney, 56, officially has the support of Kevin Costner, 67, ahead of the 2022 midterm elections this November. Liz, who is running for a fourth term in the U.S. House of Representatives, but is facing tough competition from a Donald Trump-backed challenger, tweeted out Kevin’s endorsement on August 1.

In the photo, the actor wore an “I’m For Liz Cheney” white T-shirt on the set of his hit television series Yellowstone, which films in Montana. Kevin, who also wore a black cowboy hat, black sunglasses, and light blue jeans, had a big smile on his face while fearlessly supporting Liz’s reelection bid.

Liz, who is a harsh critic of former president Donald Trump and serves on the committee investigating the January 6 Capitol riots, praised Kevin for backing her campaign. “Real men put country over party,” the Republican congresswoman wrote alongside the tweet.

Kevin Costner & Family: Photos Of The Actor & His 7 Children

On November 8, Liz will face off against fellow Republican Harriet Hageman, 59, to elect the U.S. representative for Wyoming’s at-large congressional district. Early polling has Liz trailing behind Harriet by over 20 points in the race thanks to pro-Trump Republicans who are unhappy that Liz has gone against the former president. Liz is one of many people who say that Trump was responsible for the insurrection by spreading lies about the 2020 election, incorrectly claiming that he won and not President Joe Biden.

Liz appears to be banking on Kevin’s public display of support to give her a much-needed boost in the polls. The Oscar winner previously endorsed Democrat Pete Buttigieg in the primaries of the 2020 Election. In an August 2020 interview with The Daily Beast, Kevin talked politics and called Trump “dangerous.” He also revealed that he’s an Independent.

Herschel Walker’s Son & His 3 Other Secret Kids: Everything To Know

“I vote for who I think has the best interests of the country and how we sit in the world,” Kevin explained, adding, “I really go back and forth on my votes. The Democratic Party doesn’t represent everything that I think, and neither does the Republican Party right now—at all. So, I find it too limiting.”