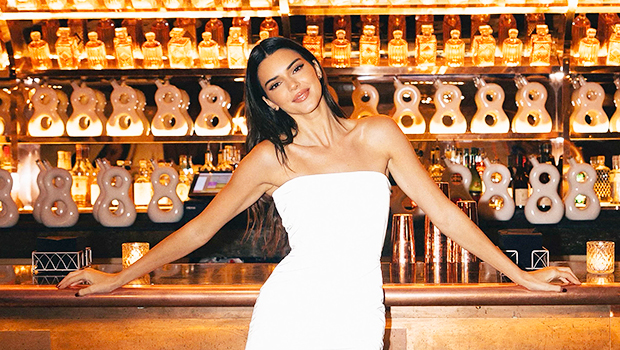 Kendall Jenner lit up the night on Sept. 22 as she stepped out of her New York City hotel to head to her exclusive 818 Tequila party. The second youngest KarJenner sibling, 26, donned a strapless white dress by Rick Owens that hugged her tiny frame for the special event she hosted. The supermodel let the dress do the talking and wore no jewelry, but added some sparkle with silver flip-flop style heels. Her black hair was straightened and tucked behind her ears, completing the simple yet stunning look.

Kendall rented out the Little Sister Lounge in the Moxy East Village hotel for the launch of her new ultra-premium Añejo Reserve by 818. The supermodel enjoyed the night with friends, including Scott Disick and her friend Tyrell Hampton according to a source for Page Six. “It was a good crowd, and everyone seemed to be having fun,” a “spy” also told the publication. Kendall also appeared to be having fun, as she was “really sweet talking to people” throughout the night.

The source added, “The club was shut down, and it was packed. It was vibes. People were taking shots of 818, everyone was talking, and the music was good.” The insider also claimed the party lasted until after midnight and the music of choice was 2000s hip-hop throwbacks.

Kendall gave fans an inside look at her party via her Instagram Story, first taking a mirror selfie of herself in the beautiful dress and then showing 818 Tequila being poured into a glass with an ice cube in the shape of an eight. She also shared photos of a light-up tequila display being carried over to a table as well as an ice bucket filled with her products, including her nifty new bottle that takes the shape of an eight and looks like a piece of abstract art.

While Kendall did not post any photos from her party on her feed, she shared a series of promotional photos on Sept. 20 when the new reserve became available. “Elevate your bar. Eight Reserve by 818 is now rolling out across stores, bars and restaurants in NY, CA, and FL, and available to order online at eightreserve.com,” she wrote in one of her captions.

Kendall Jenner’s Boyfriend: All About Her Ex Devin Booker & Their Heartbreaking Split