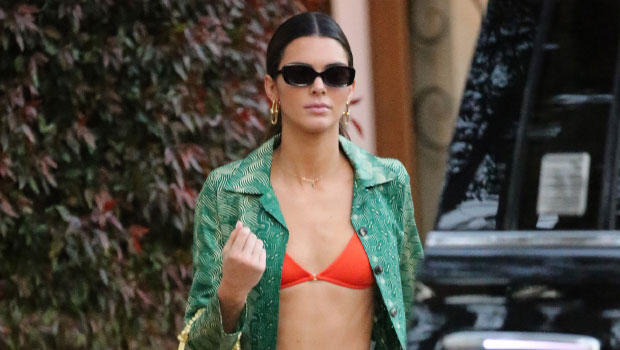 Kendall Jenner, 26, looked like the perfect vision of summer, in her latest Instagram video. The model rocked a red bikini with a pink floral print and a tan baseball cap as she stood in front of a body mirror and held up her phone to film the clip. At one point, she shook her hips from side to side and did a little dance as her long hair draped across one shoulder.

Last week, Kendall shared a different bikini-themed post, which showed her modeling a yellow two-piece under an open cropped coral cardigan. She also added sunglasses to the look as her hair was down. She topped things off by accessorizing with a black and gold purse over one shoulder.

When Kendall’s not getting attention for her swimsuits, she’s doing so for her personal life. The beauty made headlines for showing support for her ex Devin Booker by rocking a Phoenix Suns shirt during an outing in Los Angeles on July 7. The tee was a white vintage one that showed some of the team’s players from the 1990s. Devin is currently a shooting guard for the same Arizona team.

Kendall and Devin broke up in June after two years of dating, but her recent support seems to indicate they’re still on good terms. A source previously told us that they were simply “not on the same page” and that was the reason for their split. “Kendall broke up with him because she didn’t think he was taking the relationship as seriously as she was,” the source EXCLUSIVELY told HollywoodLife. “Even though she’s not at a place right now where she wants to get married and have kids, it’s also something she knows she eventually wants.”

“Devin was clearly not on the same page and explained how there’s much more he wants to do in life,” the source continued. “She had a lightbulb moment and is coming to terms with the fact that even though they had a great run, ultimately it’s not what she wants.”

Kendall Jenner’s Boyfriend: All About Her Ex Devin Booker & Their Heartbreaking Split