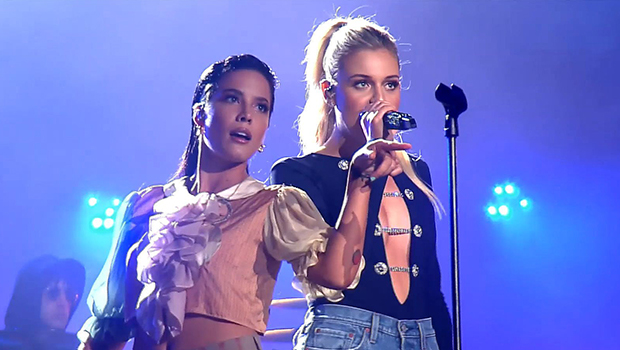 Kelsea Ballerini has a lot to say on her new album, Subject To Change, and it’s not just about her divorce from Morgan Evans. The song “Doin’ My Best” has a reference to Kelsea’s friendship with Halsey, who she says she doesn’t talk to anymore. “I was friends with a pop star, I put ’em on track four, but wish I could take it back, I woulda never asked, if I knew we wouldn’t talk anymore,” Kelsea sings in the song’s second verse.

In 2020, Halsey was the featured artist on Kelsea’s song “The Other Girl,” which was track four on the album Kelsea. The duo performed the track for CMT Crossroads, which was filmed in Oct. 2019 and aired in March 2020. They also teamed up to sing it at the CMT Awards in October 2020, with a buzzed-about performance that channeled Coyote Ugly. It’s unclear what happened between Kelsea and Halsey in the less than two years since that performance.

Fans were absolutely shocked when they heard the lyric, as nothing previously happened in public to suggest that Kelsea and Halsey were no longer friends. “Sad Kelsea and Halsey aren’t talking anymore,” one person tweeted. Another wrote, “I think the saddest part of Subject To Change was finding out Kelsea and Halsey aren’t friends anymore.” Kelsea first met Halsey when she attended their Nashville show in 2018. They went out together afterward and formed a fast friendship. In 2018, they also both performed at the Victoria’s Secret Fashion Show.

“Doin’ My Best” is one of the more vulnerable songs on Kelsea’s album, as she also sings about the struggles in her marriage to Morgan, who she filed for divorce from in August. “Therapy for one turned into therapy for two,” she croons. “When you get married that young, you got a lotta s*** you gotta get through.” Fans began speculating that something was up in Kelsea and Morgan’s relationship due to their lack of social media posts together during summer 2022. She confirmed the breakup at the end of August.

Halsey’s Tattoos: Everything To Know About Their Ink