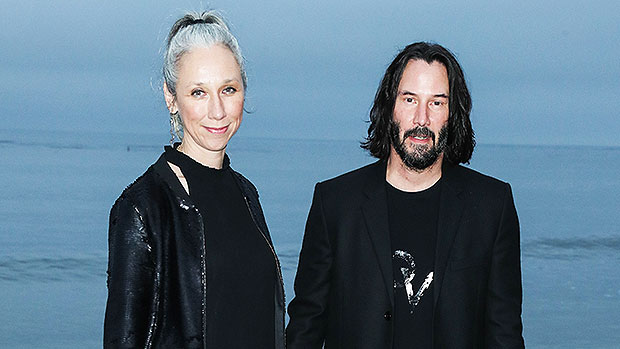 Keanu Reeves and his girlfriend Alexandra Grant couldn’t help but look effortlessly together while strolling hand in hand in New York City on Thursday, June 7! The John Wick star, 57, and his professional artist sweetheart, 49, were snapped in a rare photo, which you can see here, appearing casually chic on the sidewalk. In the photo, Alexandra rocked bright pink pants and a black sleeveless top. She accessorized with a black belt with a gold-tone detail, black flats, and a stylish brown bucket bag. Keanu rocked a monotone navy-blue suit, paired with brown lace-up boots. They appeared to be talking and smiling as they held hands.

While their public appearance wasn’t all that common, they’ve proven themselves as a couple that’s here to stay. Keanu and Alexandra have officially been together for about four years — but they’ve known each other for a lot longer than that. The power couple first met back in 2009 at a dinner party, according to Us Weekly. From there, they worked together on two books that she illustrated between 2011 and 2016, remaining friends until things took a turn toward the serious around 2017.

To the delight of fans, Keanu, who had been without an official girlfriend for decades, debuted his relationship with the silver-haired beauty in November of 2019 at the LACMA Gala. But apparently, insiders knew that romance was blossoming long before that. Actress Jennifer Tilly revealed back in 2020 that their 2019 “debut” wasn’t as new as the general public thought it was.

“I remember a couple years ago, about a year and a half ago, [Alexandra] said, ‘Keanu Reeves is my boyfriend’ and I’m like, ‘Wait. What? What? What?’” she told Page Six at the American Heart Association’s Go Red for Women Red Dress Collection in February 2020. Jennifer explained that she was surprised their public relationship seemed to be news at the time.

“It’s really astonishing to me how in the last five months, all of a sudden, she goes to an event with him and everybody goes insane, like, ‘It’s his new girlfriend,’ because she had gone to a lot of events with him,” she continued. “It’s just suddenly surfaced that he’s been dating her for several years.”

Keanu Reeves & Winona Ryder’s Relationship Through The Years: A Timeline Of Their Bond