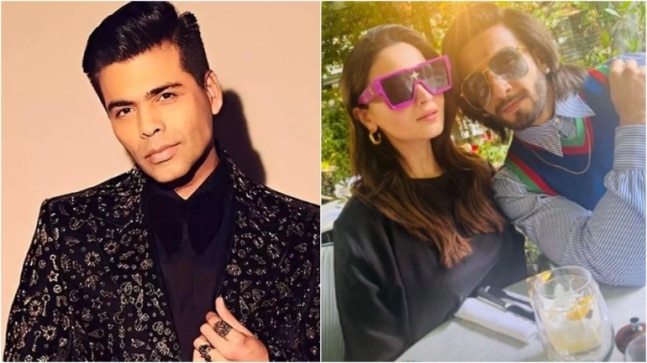 Alia Bhatt and Ranveer Singh were earlier working on their upcoming film, Rocky Aur Rani Ki Prem Kahani. Karan Johar is excited as well as he is making a directorial comeback with the film. The romance drama will hit the theatres on February 10, 2023. Meanwhile, KJo, who is currently having the time of his life with his family in London, recently stepped out in the city to explore. And look who he bumped into! His ‘Rocky and Rani’ AKA Ranveer Singh and Alia Bhatt.

Last year in July, Karan Johar announced his next directorial venture, Rocky Aur Rani Ki Prem Kahani. Recently, while strolling in London, KJo bumped into Ranveer Singh and Alia Bhatt. He took to his Instagram stories to share a picture of them and captioned it as, “I found Rocky and Rani (sic)!”. In the photo, Ranveer looks dapper in a striped blue shirt with a blue sleeveless T-shirt over it. Meanwhile, Alia looks pretty as usual in a black top. She paired her look with funky sunglasses.

Check it out below: Directed by Karan Johar, Rocky Aur Rani Ki Prem Kahani is written by Ishita Moitra, Shashank Khaitan and Sumit Roy. The film is set to hit screens on February 10, 2023. KJo is returning as a director with the film starring Alia Bhatt and Ranveer Singh. Rocky Aur Rani Ki Prem Kahani a lso stars Jaya Bachchan, Dharmendra and Shabana Azmi in pivotal roles. The upcoming romantic drama film is produced by Dharma Productions and Viacom18 Studios. It will also mark the onscreen reunion of Dharmendra and Jaya Bachchan after 48 years, having last worked together in Sholay (1975).