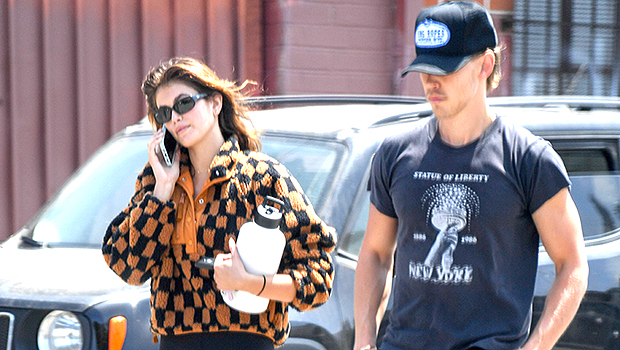 Kaia Gerber was spotted leaving the gym in Los Angeles on Wednesday, flaunting her toned legs in some short, black alo bike shorts. The 20-year-old model, who also rocked an orange-and-black-checkered fleece shacket, was joined by her beau, Austin Butler, for the occasion. The 30-year-old actor went casual-cool for the outing, wearing signature black adidas track pants, a black tee with a white graphic design and a black baseball cap also with a white design.

Kaia and her Elvis star beau were first spotted together last December and have been seemingly inseparable ever since. They made their official red carpet debut together at W Magazine‘s annual Best Performances party in March. Holding hands as they arrived at the event roughly three months after first being linked, Kaia and Austin made a well-dressed pair for the occasion.

Making their debut as a couple in stylish fashion, Austin sweetly held Kaia’s hand as they entered the Los Angeles celebration. For the event, Kaia chose a plunging skirt-and-shirt set in a sparkling hombre hue, completing the green and gold look with strappy black heels. Though Austin elected for a classic ensemble of a black suit and matching dress shoes, he inserted his signature style with a deliciously mismatched brown shirt and a notable flare silhouette on his pants. This is the man who stepped out at Coachella with ex-girlfriend Vanessa Hudgens multiple years in a row…basic black would never do.

Kaia and Austin’s big debut comes just one month after Kaia split from Euphoria star Jacob Elordi, 24, back in Nov. 2021. Though the duo wiped their respective Instagram accounts of couple photos shortly after the breakup, their split was reportedly amicable, and Jacob has since moved on himself with model Bianca Finch, 24. Austin, who at ten years Kaia’s senior has significantly more experience in the adult dating world, split from long-time girlfriend Vanessa back in 2020 after they spent nearly nine years together.