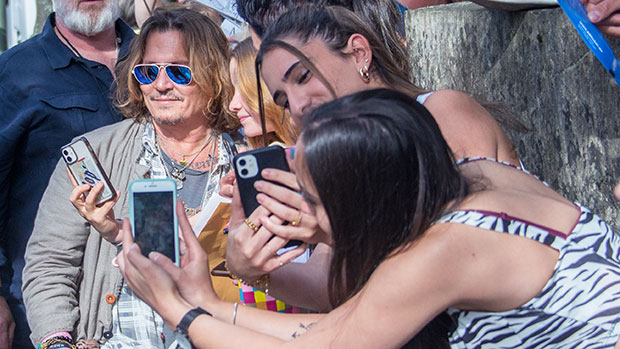 Johnny Depp is continuing to enjoy his life post-trial! Several weeks after the actor’s ex-wife Amber Heard was found liable for defamation, Johnny was photographed surrounded by a group of female fans in Germany asking photos and signatures. The Pirates Of The Caribbean star greeted his supporters in front of the Stadthalle Offenbach in the city of Hesse ahead of his concert with Jeff Beck. He said ‘hello’ and posed with a big smile on his face, looking relaxed and happy during the daytime outing.

In the photos, Johnny could be seen wearing a gray T-shirt with a plaid flannel shirt on top, which he layered with a gray jacket atop the two. He accessorized his look with a pair of large mirrored sunglasses. The actor appears to be enjoying touring Europe with Beck over the last several weeks and ahead of their upcoming collaboration album, he took to IG to announce the release of their single “The Death and Resurrection Show” is out now.

“The Death and Resurrection Show” is a cover of British band Killing Joke’s 2003 song of the same name, and Johnny revealed on July 7th that his rendition of the song is “out now” ahead of his and Beck’s upcoming July 15th album. “It’s an extraordinary honor to play and write music with Jeff, one of the true greats and someone I am now privileged enough to call my brother,” Johnny said in a statement ahead of the album release, while Beck added, “”I haven’t had another creative partner like him for ages. He was a major force on this record.” The musician joked, “I just hope people will take him seriously as a musician because it’s a hard thing for some people to accept that Johnny Depp can sing rock and roll.”

Johnny’s foray into the rock and roll world comes after his long-winded defamation trial against his ex-wife Amber Heard. Recall, the Sweeney Todd actor accused the Aquaman star of defaming him and causing him to lose work after she published a 2018 op-ed in the Washington Post detailing her own domestic abuse. In June, Depp won all three defamation claims in his case against her, and the jury awarded the him $15 million in damages.

Recently, a source told HollywoodLife EXCLUSIVELY that Johnny wishes his ex “no ill will” following the trial. “He isn’t going to jump on the social media hate band wagon and he just wants to move forward with his own life. Johnny can’t wait to go on tour next year and even though it’s a ways away he has a ton of projects lined up to keep him very busy in the meantime,” the insider shared at the time. “Johnny is happier than he has been in a long time and he feels like this is a whole new chapter for him. Music has always been cathartic for Johnny and this is really what he needs right now after all the stress and drama he’s dealt with for the past several years.”