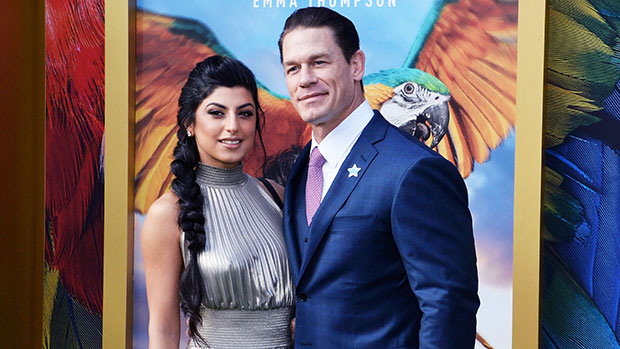 WWE superstar/actor John Cena and his wife Shay Shariatzadeh took their red-hot romance to the Big Apple on Wednesday, August 24! The couple, who celebrated their marriage in July, were spotted at the 77th birthday bash of John’s buddy Vince McMahon, who was seen in public for the first time since retiring as the CEO and Chairman of the WWE last month. Check out the photos here.

The loved-up pair held hands as they arrived to the starry shindig at the Waverly Inn restaurant in New York City. The Suicide Squad alum looked quite dapper as he rocked a light blue suit complete with an orange striped tie and brown leather loafers. Shay stole the spotlight in a plunging LBD, which was paired with a tuxedo jacket, an oversized tote and a set of high heels.

During an intimate ceremony in Vancouver in July, John and Shay said “I do” in front of family and friends after making it official two years prior by getting a marriage license in Florida. The Trainwreck star and Vancouver native were legally wed on Oct. 12, 2020 at a Hillsborough County, FL courthouse after a year of dating.

John admitted it was love-at-first-sight when he met Shay while filming at a Vancouver restaurant where she was dining with a group of friends. “There was one woman I was looking at and I couldn’t take my eyes off her… that’s when it started,” John said in an interview to Entertainment Tonight. They would go on to make their red carpet debut on Oct. 26, 2019 at the NYC premiere of his film Playing With Fire.

The former wrestler has also said that he is open to starting a family with Shay, which is a departure from his previous views on fatherhood. “I’m a little bit older, a bit wiser. I’m realizing there is life and life exists and it’s beautiful — and I think part of that is being a parent, so we’ll see,” he revealed to British outlet The Sun in June 2021.

John Cena’s Wife: Everything To Know About Shay Shariatzadeh