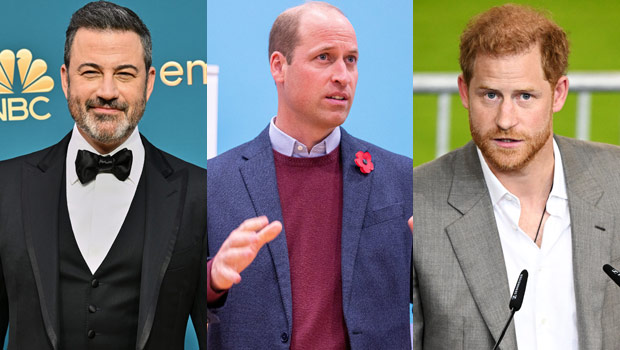 Most of the world was shocked when The Guardian published an excerpt of Prince Harry’s upcoming memoir, Spare, in which he detailed an alleged fight with his older brother, Prince William. However, Jimmy Kimmel figured that the supposed scuffle needed a visual representation. During the Jan. 5 episode of Jimmy Kimmel Live!, he presented “Two Princes: A True Story,” a reenactment featuring two people dressed like Prince.

As the text of the alleged fight appeared on screen (“William set down the water. Then, he called me another name”), the Princes acted it out, with Prince 1 saying, “You’re a wanker!” in a comical accent. A slap fight ensued, with “Prince” Harry falling on top of a dog’s food bowl. “This is what it sounds like when doves cry!” said “Prince” William. When the story reaches the line “Then I made him face the music,” “Prince” Harry takes one of Prince’s signature guitars and plays a killer solo. Sadly, the reenactment didn’t end with a playing of the Spin Doctors’ “Two Princes,” but perhaps “Weird” Al Yankovic will do something with that.

Kimmel’s recreation might have been absurd, but the text shared was accurate to what Harry wrote in his memoir, Spare. Harry wrote that William visited his brother at Nottingham Cottage to complain about Meghan Markle, which Harry then said was “repeating the press narrative” about his wife, “and that he expected better.” This supposedly resulted in the two brothers “shouting over each other,” which allegedly led to a scuffle.

“He set down the water, called me another name, then came at me,” wrote Harry. “It all happened so fast. So very fast. He grabbed me by the collar, ripping my necklace, and he knocked me to the floor. I landed on the dog’s bowl, which cracked under my back, the pieces cutting into me. I lay there for a moment, dazed, then got to my feet and told him to get out.” William wanted Harry to hit him back, which the younger prince declined to do. Harry wrote that William, as he left, “turned and called back: ‘You don’t need to tell Meg about this.’ ‘You mean that you attacked me?’ ‘I didn’t attack you, Harold.’”

Harry doubled down on the accusations in a preview of his Jan. 8 interview with ITV. “What was different here was the level of frustration,” Harry said. “I talk about the ‘red mist’ that I had for so many years, and I saw this ‘red mist’ in him. He wanted me to hit him back. But I chose not to.”