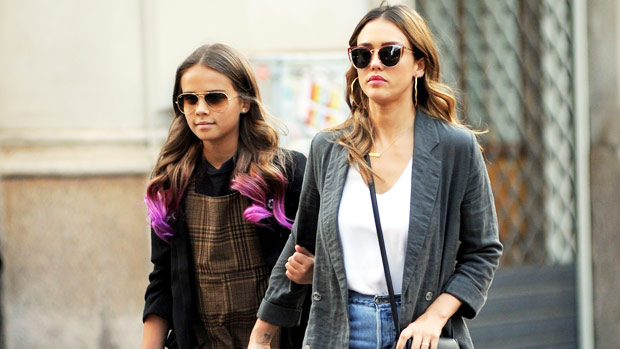 Jessica Alba’s oldest child Honor is getting so tall! The actress’s 14-year-old daughter was taller than her mom, 41, and almost as tall as her dad Cash Warren, 44, in a series of photos that Jessica posted from a trip to Disneyland on Monday, January 9. The Sin City star showed what a wonderful time she had with her family on her Instagram.

The actress shared a variety of photos from the day at the “Happiest Place on Earth” showing her and Cash’s family and many other friends, having a blast at the park. In the first shot, Cash had his arm around Jessica, who rocked a gray jacket and black cap, as she had her arms around her son Hayes, 5, who held a Mickey Mouse-themed toy. Honor sported a green and black sweater and stood beside her dad and behind her sister Haven, 11. Some of the other shots that Jessica shared included a close-up selfie of herself and Honor with some stars on her forehead, and a family photo of all of them on a roller coaster together. She also had a sweet photo of herself with her daughters and her parents Cathy and Mark Alba.

In the caption, Jessica revealed that the day in Disneyland was a birthday celebration for Hayes. “Celebrating our 5-year-old with the squad,” she wrote, with some celebratory emojis. “Love the mems we create [at] Disneyland with the whole fam and our besties.”

Besides being nearly as tall as her dad, Honor also looks so much like her mom. The actress regularly shares family photos, especially over the holidays, and her oldest daughter is the spitting image of her. When the family took a photo in matching pajamas for Christmas, Honor was almost her mom’s twin. Jessica has also commented on just how tall her “baby girl” has gotten over the years. Back in August, she shared a shot of Honor giving her a hug and almost towering over her. “I can’t believe she’s so tall,” she wrote in the Instagram caption.