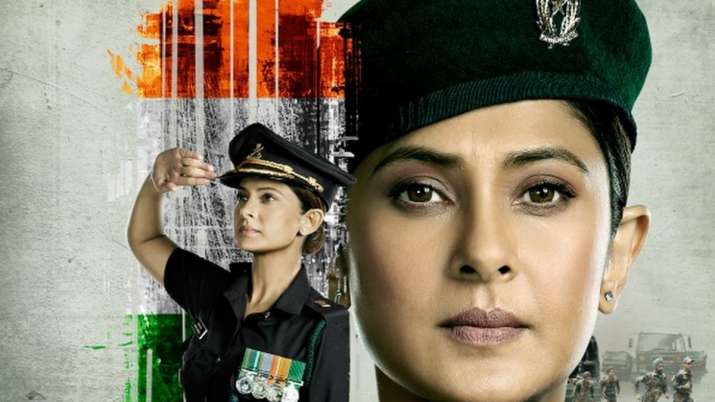 Popular TV face Jennifer Winget is back in Season 2 of ‘Code M’ as Major Monica Mehra. Ektaa R. Kapoor’s ‘Code M’ marks the OTT debut of Jennifer. The actress who played the role of a psychopath Maya in ‘Beyhadh 2’, is seen in the series as a fearless and brave Monica Mehra, the hero in the series that revolves around the Indian Army. Jennifer told IANS why she is so fond of her role and what makes it challenging. She also talked about her fitness mantra.

Jennifer shared about the challenges she faced while depicting Major Monica Mehra on-screen: “Every bit of this character, I have enjoyed playing because it is also kind of therapeutic for me as a person. Monica, for example, is such a strong-headed and such a confident and no nonsense kind of person. So, I take a leaf out of her book sometimes. With this character, I try to believe in what I am. So, it’s just as challenging and tough, it is also very rewarding as an actor.”

While season 1 of ‘Code M’ saw Major Monica Mehra, an Indian Army lawyer who is investigating cases related to the assassination of Indian Army officers, Season 2 will add more detailed side of her character.

As she mentioned: “We all know her (Major Monica Mehra) commitment and love for the country. But in this season, you will also get to see Monica’s childhood, and certain memories, certain instances that have haunted her throughout her life. And that will come into play, and we’ll just kind of get a different look into Monica’s life this time.” ALSO READ: ‘Dayaben’ Disha Vakani re-entering Taarak Mehta Ka Ooltah Chashmah? New promo raises questions

“It was just a great experience. In season one, I got to work with Rajat Kapoor and Tanuj. I got to learn so much from from Mr Kapoor. It was just amazing working with him and Tanuj. As you know, we have also become friends over a period of time, and he’s just such an amazing person to be around. He is full of life.”

“Every time we are working together, I’m just constantly laughing and I just love having that positivity around me. And in season two I got to work with Swanand Kirkire and other actors that I can’t name right now. So, it is just so nice to be in their company and to learn so much from them,” she added.

How did you prepare yourself physically and emotionally for playing such a badass character? and she replied: “I think it’s not just me. We all put in a lot of effort from our director, producer, or action master, my co-actors, we all, I think, got on the same page and put in the same amount of love, heart and soul. There was physical training that I had to do to be able to perform the stunts effortlessly on-screen. But that’s the kind of prep that I love to do before any project that I start.”

Jennifer asserted despite playing a strong-headed character, there are many shades of Monica that the audience will relate to it. ALSO READ: Salman Khan starrer Kabhi Eid Kabhi Diwali title to be changed back to Bhaijaan?

“The reason why people like her, is also because she is playing an Army officer doesn’t mean that she’s not fun. With Monica, you see all sides of how a normal girl would be, she got friends, she has a troubled relationship and then there’s this other side to her, which is this strong feminist, feminine Army officer who believes in herself.”

“I think these two sides of her every woman can relate to because every woman has these two sides where they play these duties that are given to them so diligently at the same time they don’t forget to have fun. So, I take a lot from Monica and both ways I have fun also and I’m being diligent at work also.”

While playing such a fierce character, one needs to focus on physical strength and ask her fitness mantra, she revealed: “My fitness mantra is to be healthy is to not just conform to one form of exercise or diet or go on these crazy diets. I don’t believe that. I believe in being healthy. I am not a gym fanatic. I love yoga, my pilates, horse riding, swimming, I love doing these kinds of outdoor sports. They allow me to be in nature because we don’t get to do that very often in the city. I am consistent with whatever workout that I do. And just stick at it and have fun with it.”

After receiving so much love and appreciation for her character in the series, she says: “I am grateful because to play a character from the armed forces, there is a lot of responsibility, and there’s a lot of expectations. And to do that, and be able to get the same amount of love from the people that they’ve given me throughout these years is just very encouraging. And I feel extremely blessed,” she concluded.

Alongside Jennifer, Tanuj Virwani and Swanand Kirkire will also be seen returning to ‘Code M’ Season 2 in key roles.