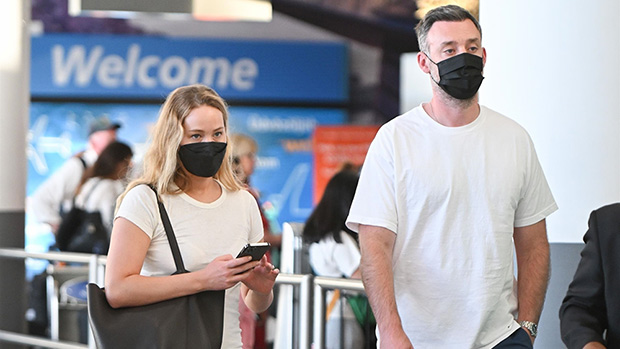 Jennifer Lawrence, 31, and her husband Cooke Maroney, 38, were on the move on Sunday, August 7. They were pictured at JFK Airport in New York City, possibly flying somewhere fun to start celebrating Jennifer’s birthday that’s coming up. The actress and the art gallerist wore matching white T-shirts and black face masks as they made their way through the airport. Such a cute couple!

Jennifer and Cooke didn’t match head to toe with their airport attire, though. The X-Men: First Class actress added to her casual look with a pair of grey sweatpants and white sneakers. She carried a big black purse over her shoulder and let her beautiful blonde hair down. Cooke, meanwhile, wore a pair of fancy blue pants and black converse sneakers. The only accessory he had on was an expensive-looking watch on his left wrist.

It’s unclear where the couple was flying to. Their six-month-old child was not at the airport with them. That means Jennifer and Cooke may be off on an enjoyable vacation just the two of them for J.Law’s upcoming 32nd birthday. The Oscar winner will turn 32 on August 15, marking her first birthday as a mother.

Jennifer and Cooke welcomed their first child in February 2022, over two years after they tied the knot in an intimate Newport, Rhode Island ceremony in Oct. 2019. The lovebirds still haven’t revealed the name and gender of their baby to the public. However, Ellen DeGeneres did let it slip that Jennifer’s baby is a boy in May.

Since giving birth, Jennifer has been seen many times out and about with Cooke around NYC. The couple went for a walk without their baby on July 24 and J.Law wore a fashionable pair of white overalls. One month earlier, the couple traveled to LA with their newborn and enjoyed a nice lunch at Eataly as a happy family of three.