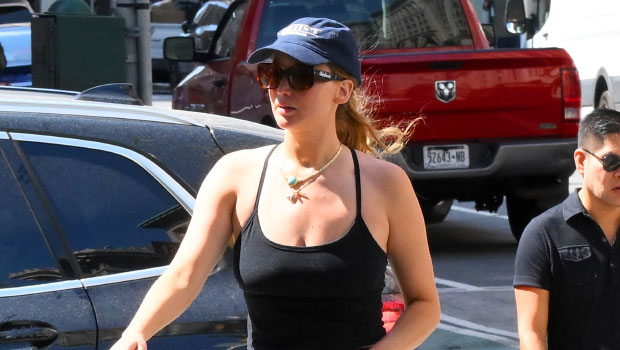 Jennifer Lawrence, 32, was spotted heading to a yoga class in New York City on Aug. 30 six months after she became a mother for the first time. She donned an athletic outfit of long black legging and a black spaghetti strap cropped tank she accessorized with layered necklaces and a navy baseball cap. She completed her outfit with brown Illesteva sunglasses, a forest green purse, and Adidas slides worn with gray socks.

The Hunger Games actress gave birth to her child with husband Cooke Maroney, 37, in February and has only been spotted out and about a handful of times since, such as on a family hike with Cooke and his parents just one week after they welcomed their bundle of joy into the world. Jennifer and Cooke made their first public debut as parents just a few days earlier at the Sunset Tower Hotel in West Hollywood where they enjoyed a meal without their little one. Then, in June, they were spotted house hunting in the Coldwater Canyon area of Beverly Hills and visiting an Italian food market in the Westfield Century City mall in Los Angles.

Jennifer and Cooke have not just been far and few between with their public outings; they have also released absolutely no information about their child, including its gender and name. However, fans think their neighbor, Ellen DeGeneres, 64, accidentally revealed their child’s gender on The Ellen DeGeneres Show in May when she was chatting with the new mom. Ellen mentioned being neighbors with the Silver Linings Playbook actress and said, “I do hear you sometimes talking to him and it’s really cute,” insinuating that her baby is a boy. HollywoodLife reached out J.Law’s representatives about the situation, but could not get an answer.

Jennifer was last seen on a red carpet in Dec. 2021 to promote her Netflix film, Don’t Look Up, in which she starred opposite Leonardo DiCaprio, Meryl Streep, and Jonah Hill. It seems like fans won’t see Jennifer on one for quite some time. In Dec. 2021, a person close to the actress revealed to HollywoodLife EXCLUSIVELY that she won’t head back to work for at least a year following the birth of her baby. “As for Jen’s career, she has really enjoyed having this break and focusing on herself and her pregnancy. She has worked hard for several years, and it has been very rewarding for her,” the source explained. “She is going to get back to acting but not for a year after the baby is born.”

The source said that Jennifer has been reading scripts during her downtime, so perhaps fans won’t have to wait too long until she’s back on the big screen.