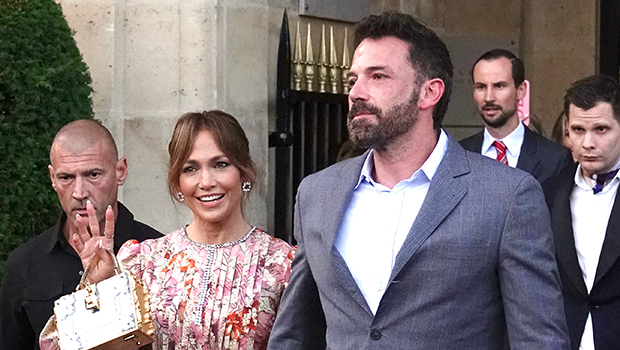 A new video, which you can see here, reveals that Jennifer Lopez brought out her entertaining chops BIG time during her Aug. 20 wedding to Ben Affleck. In the clip, Jennifer takes center stage in the middle of the dance floor, while Ben is seated directly in front of her. She goes on to serenade him with a brand new sing, letting him know that she “can’t get enough” of him. Meanwhile, Ben is watching on with a huge smile on his face.

In the video, J.Lo is wearing one of her three wedding gowns, and she’s surrounded by dancers and backup singers, who are all wearing black. In addition to singing, she’s also showing off some of her signature dance moves, shaking her hips right in front of her hubby. The song lyrics feature Jen singing about the “passion” in Ben’s eyes, as well as how she “still loves” him after all these years.

Jennifer and Ben celebrated their marriage at his mansion in Georgia, just over one month after they eloped in an intimate Las Vegas ceremony. For the Georgia nuptials, friends and family were in attendance, and the lavish affair was clearly quite entertaining!

Jen and Ben’s union has been 20 years in the making, as they first got engaged in 2002, but called off their wedding just days ahead of their Sept. 2003 date. They stayed together until the beginning of Jan. 2004 before going their separate ways. Both Jen and Ben went on to get married and have kids with other people, but they found their way back to each other in April 2021.

Following their reconciliation, things got hot and heavy very quickly. Less than one year later, Ben proposed while Jen was taking a bath at home. They wasted no time before tying the knot, marrying in Vegas just four months later. The lovebirds are currently celebrating their marriage with a honeymoon in Italy.