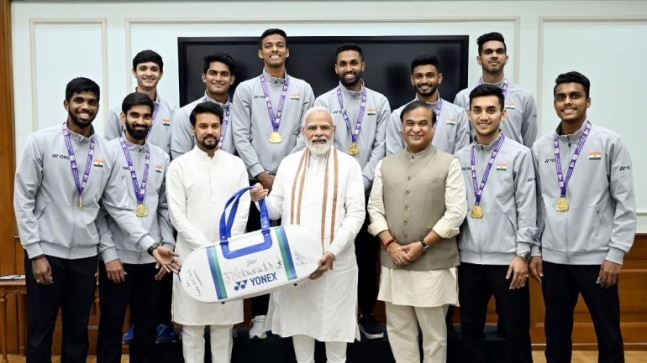 India’s star shuttler KidambI Srikanth on Sunday said it’s hugely encouraging to have the constant backing of Prime Minister Narendra Modi for Indian athletes who are striving to achieve great things at the highest level. Stressing that PM Modi’s support to the elite athletes is ‘unmatched’, Srikanth expressed delight after the interaction in New Delhi.

PM Modi hosted the victorious Thomas Cup team at his residence on Sunday, May 22. Notably, Modi had congratulated the star shuttlers over the telephone moments after they scripted history, beating Indonesia 3-0 in the final of the prestigious team championship.

PM Modi has been making sure to interact with athletes after every major competition. The country’s premier has hosted star athletes year after year and his phone calls to Olympic medalists during the Tokyo Games last year came as a huge boost of confidence for the ones who are daring to dream big in sport.

During his interaction with the champions, an elated PM relived the memory of the historic Thomas Cup campaign. In fact, Srikanth, who was undefeated in the campaign in Bangkok, gifted the Prime Minister a badminton racquet while Lakshya Sen, who played the first singles for India, gifted the PM Almora’s famous ‘bal mithai’.

“Our athletes can proudly say that we have the backing of our Prime Minister. That is something that is unmatchable. He really took so much time out of his busy schedule. I am very happy. This will motivate all the players to do well,” Srikanth said.

Chief national coach Pullela Gopichand said, “PM follows the players and the sport, and his thoughts connect with the players.”

“I have a been a player and won medals, but have never been called by my PM. This is something that they will cherish forever. It’s a big morale booster,” Boe said.

Lakshya Sen, who gave India the winning start by beating Anthony Ginting, in the final of the Thomas Cup shared his experience of meeting and greeting the Prime Minister.

“The PM asked for Almora’s bal mithai and I got it for him. It is touching that he remembers small things about players,” Sen said.

“We feel very motivated whenever you meet us, interact with us. I hope I keep winning medals for India, keep meeting you, and keep getting bal mithai for you,” he added.