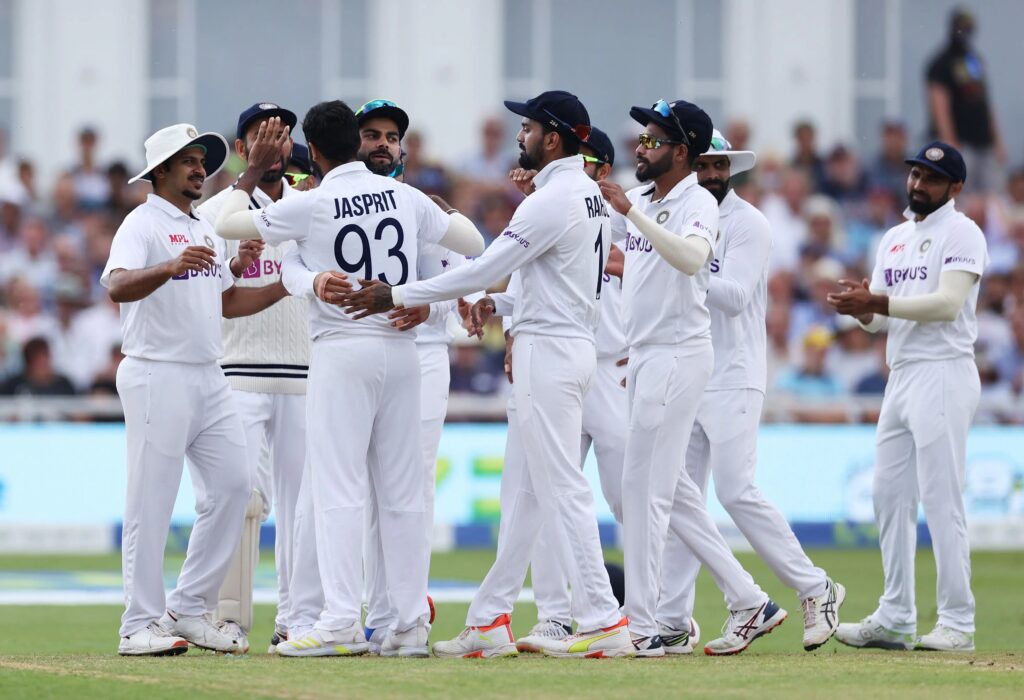 India vs England Head To Head Records- 5th Test, IND tour of ENG 2022. India came back strongly from a 99-run deficit to win the 4th Test match comfortably by massive 151 runs last time these two teams met in September 2021 for the fourth Test match. The Indian team was all over England and looked all set to win the Test series in English conditions, but the last Test was rescheduled due to Covid-19 with India leading the series 2-1.

A lot has changed from that Test with new captains in charge for both teams. England has found new energy and enthusiasm with Brendon McCullum- Ben Stokes duo that steered them to a scintillating 3-1 series win over New Zealand. India on the other hand has made a few changes to their batting line-up and is looking to find their best possible XI that could give them the balance and depth here.

The duo of James Anderson and Stuart Broad re-joined together as they miss a plethora of fast bowlers due to injury. Newcomers Matty Potts and Jamie Overton were very impressive in their debut series and will be looking to get into action in this match. Jack Leach comes into this match on the back of his twin 5-wicket haul and 10-wicket match haul into this match.

India`s batting line-up has a couple of puzzles to solve in their selection and skipper Rohit Sharma’s availability after he tested Covid-19 positive further causes concern to the visitors. Virat Kohli, Shubman Gill, Rishabh Pant, and Shreyas Iyer are the sure-shot players in the XI with Cheteshwar Pujara expected to get the nod ahead at No.3. The likes of Hanuma Vihari, Mayank Agarwal, or KS Bharat might slot in at the top if Rohit Sharma is unavailable.

Jasprit Bumrah and Mohammed Shami are expected to lead the Indian pace attack with Shardul Thakur expected to slot in as the pace all-rounder. Mohammed Siraj might slightly pip Umesh Yadav for the third seamer’s spot in this match. Ravindra Jadeja and Ravichandran Ashwin will be in a tussle for the spinner’s slot and the former might get a nod in owing to his superior batting skills.

Indian captain Rohit Sharma is reportedly ruled out of the fifth and final rescheduled Test match against England beginning on 1 July 2022 (Friday) at the Edgbaston in Birmingham. Just a few days back, Rohit Sharma tested positive for COVID-19 during the warm-up Test match against Leicestershire and was placed into strict isolation. India has a 2-1 lead in the five-match Test series against England.

It is also understood that right-arm speedster Jasprit Bumrah will captain the Indian Test side against England in the absence of Rohit Sharma. This is the first time in 35 years that a fast bowler will lead the Indian Test team after former legendary cricketer Kapil Dev.

India and England have met each other in Test cricket on 130 occasions. As per the head-to-head records, England has a far superior win record over India with 49 victories compared to India’s 31. England’s largely undefeated streak until the 1960s has surely played a huge role in their better record against India. However, in recent times, it has been a rather close competition between these two Test-playing nations.

Sachin Tendulkar has scored the most runs in the Tests between the two sides (2535 runs with 7 tons in 32 Tests) and is closely followed by Sunil Gavaskar (2483 runs in 38 Tests with 4 tons). England’s Alastair Cook is next with 2431 runs in 30 Tests with 7 tons.