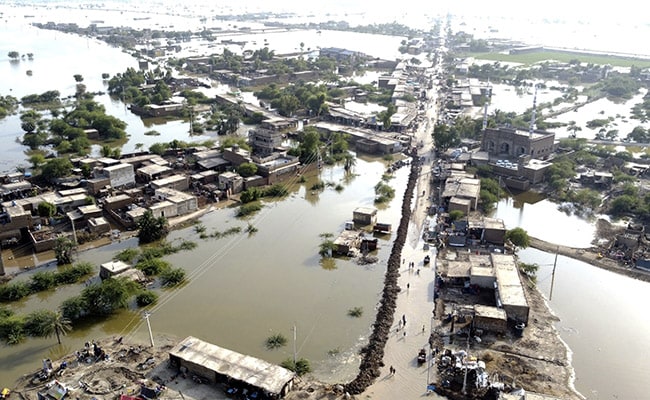 Floods In Pakistan: Devastating floods in Pakistan have killed over 1,000 people.

The government is reportedly holding discussions on providing aid to Pakistan, where devastating floods have killed over 1,000 people and affected a population of nearly 3 crore.

According to a report by The Indian Express, talks are being held at the government’s highest levels, but no decision has been taken yet.

NDTV has learnt that Pakistan is yet to officially reach out to India for help, even though one of its ministers has reportedly said that Islamabad may consider importing food material from India.

The discussions on providing aid to Pakistan come against the backdrop of Prime Minister Narendra Modi expressing his condolences to the families of those killed in the calamity.

“Saddened to see the devastation caused by the floods in Pakistan. We extend our heartfelt condolences to the families of the victims, the injured and all those affected by this natural calamity and hope for an early restoration of normalcy,” the Prime Minister tweeted last night.

The floods have worsened the inflation in Pakistan, and prices of essential items such as vegetables have shot up exponentially.

According to Pakistan media reports, Finance Minister Miftah Ismail has said that the government could “consider importing vegetables and other edible items from India” as the floods have damaged crops across the country.

“We need to consider getting some vegetables over the land border,” he told broadcaster Geo News, according to the AFP report. “We have to do it because of the kind of prices and shortages we are experiencing… Inflation has broken people’s backs.”

Earlier, India had extended assistance to Pakistan during the 2010 floods and the 2005 earthquake.