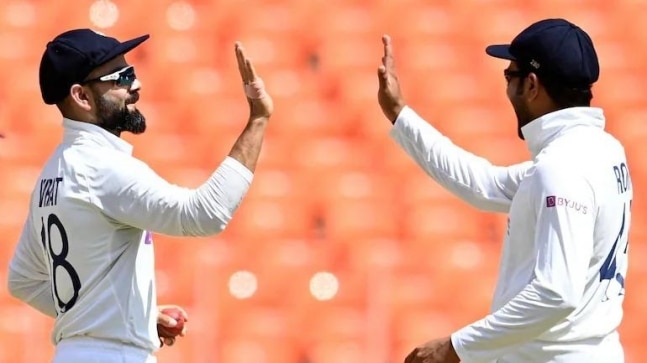 India will be up against Ben Stokes’ England in the fifth and final Test match of the series that originally started in 2021.

Rohit Sharma and Virat Kohli vs England in 2021. (Courtesy: AFP)

India are up against England in the rescheduled fifth Test match of the series that began in the summer of 2021. Much has changed since that series was bought at an abrupt closure for both teams.

India have been drubbed by South Africa away from home, in a series where India were expected to roll them over. Stalwarts in the Indian batting line-up have lost their position, and above all, Virat Kohli has resigned as the captain of the national team from all formats of the game.

Not only the Indian team, but the England team has gone through its own changes as well, and possibly more aggressive ones since the summer of 2021. A loss against Australia and West Indies in back to back series meant that the English structure was shaken to the core. New management was appointed, a new captain and a coach were handed the duties which seem to be working for them.

When England meet India at Edgbaston, they will have the upper hand in the series, considering the fact that India have never been able to win a single match in their history of cricket.

However, one must know that, it has not stopped India from writing their own destiny in the record books.

In case India manage to win or draw the Test match which starts on July 1, this will be their first ever series win since 2007. Last time India won the series against England away from home, the likes of Wasim Jaffer and Dinesh Karthik put their hands up to give India a 1-0 win against the Michael Vaughan-led side.

For England, Stuart Broad is just one wicket away from picking up 550 Test wickets which will bring him in touching distance with the legendary Glenn Mcgrath, who has 536 wickets. However, it is possible that he will not get a chance to play in case James Anderson makes a comeback from his injury.

The final Test match will be played at Edgbaston from July 1.