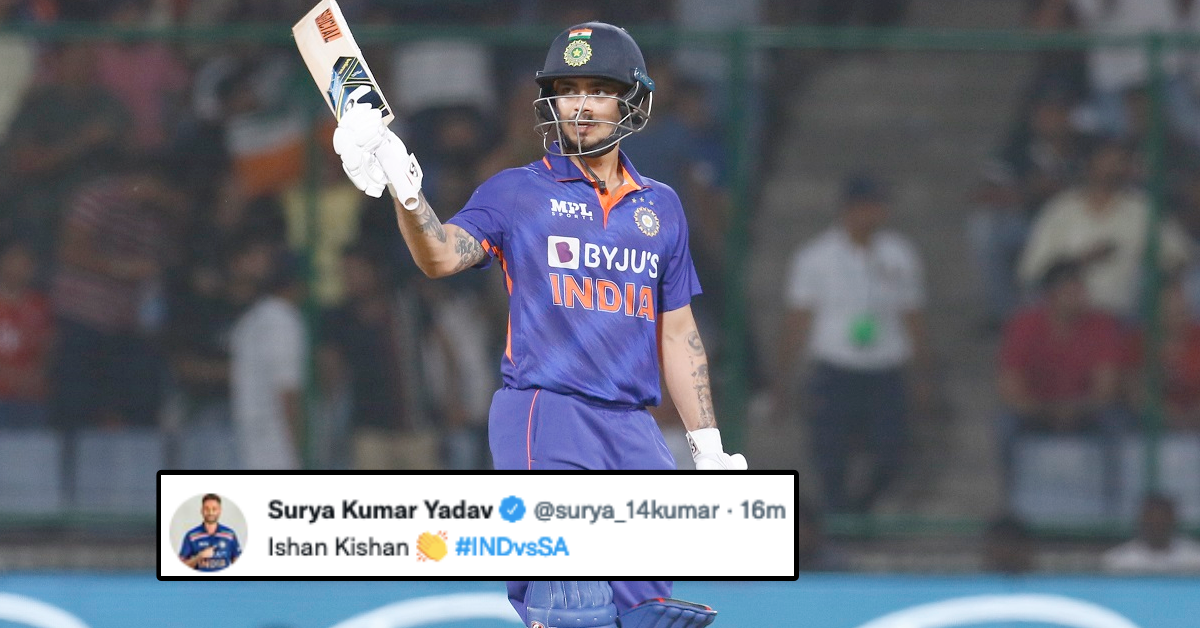 Ishan Kishan left the Twitterverse in awe with his amazing knock in the first T20I between India and South Africa which is being played at the Arun Jaitley Stadium on June 9. Kishan opened the innings for India and scored a sublime and dominating half-century.

Meanwhile, South Africa captain Temba Bavuma won the toss and chose to bat first. For the Proteas, Aiden Markram missed out after testing positive for COVID-19 and in his place Tristan Stubbs made his T20I debut.

For India, Ruturaj Gaikwad opened the innings with Kishan and Dinesh Karthik and Hardik Pandya made their comebacks into the XI.

While Ruturaj Gaikwad was weary at the start with the bat, Ishan Kishan took full advantage of the powerplay overs and slammed the Proteas bowlers to all parts of the Arun Jaitley Stadium. Gaikwad made 23 in 15 balls with 3 sixes before getting out caught off Wayne Parnell.

Kishan continued his assault as he hammered the South African bowlers, especially left-arm spinner Keshav Maharaj, who was hit for 2 sixes and 2 fours in one over. In all, Kishan slammed 76 runs in 48 balls with 11 fours and 3 sixes, adding 57 runs with Gaikwad in 6.2 overs.

His assault would have continued if not for him going bang-bang after Maharaj and trying to hit him for another six in the same over off which he had taken 20 runs off. This innings of his was heartwarming to see, after the kind of IPL 2022 he had for Mumbai Indians.

Kishan did no harm to his spot in the Indian T20I setup with this knock and had Twitterverse lauding him for his fifty.

Well played, Ishan Kishan – 76 runs from 48 balls including 11 fours and 3 sixes – started the series on a high. pic.twitter.com/LnveSkAg3N

Ishan kishan saved all his runs of IPL for this match…

Ishan Kishan was trolled mercilessly during IPL 2022 but has wonderfully returned back to form in Blue. The ‘Pocket Dynamo’ is back✨❤️ pic.twitter.com/CdWar26heK

Finally, the real ISHAN KISHAN is back 🇮🇳🤞

Looks like Ishan Kishan saved all his shots for International matches pic.twitter.com/BBJCO1xdp4

Your Apology Should be as Louder as Your Disrespect Was .
KING ISHAN KISHAN pic.twitter.com/P9m71bbBsN