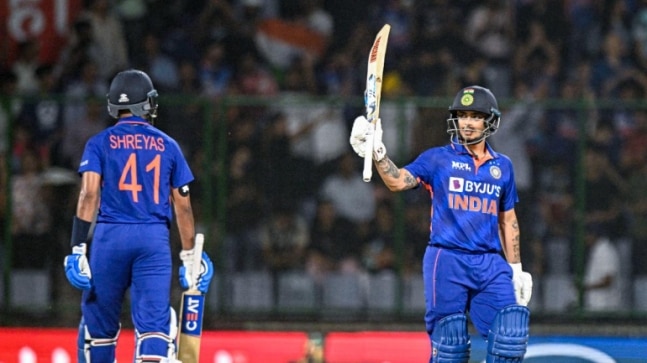 India were playing South Africa in their first T20I match of the series and began on a positive note after some breathtaking hitting.

Ishan Kishan celebrates after hitting a half century against South Africa. (Courtesy: BCCI/PTI)

India put on a good batting showing in their first outing against South Africa in the opening match of the T20I series after putting up 211 runs for the loss of four wickets. The performance was led by Ishan Kishan who hit 76 off just 48 balls and was later followed up by a strong batting performance from the rest of the unit.

Playing at the Arun Jaitley Stadium on Thursday, 9 June, this was India’s highest score in the ground beating their previous best 202/3 against New Zealand back in 2017. The performance on Thursday night was made special due to the horrific struggle India had against both pace and spin inside the powerplay overs. Ishan Kishan failed to connect anything for the majority of the first six overs, however, caught up with the rate later in the game.

With Kishan struggling in the first few overs, Ruturaj Gaikwad took the onus on himself, hitting 23 off 15 balls, keeping the momentum alive for the home team. India caught up to the rate with the likes of Shreyas Iyer cutting loose early in his innings and later by Hardik Pandya who was making a return to the national fold.

Pandya, who won the Indian Premier League with Gujarat Titans absolutely smashed his way to 31 off 12 balls helping India reach a mammoth total of 211.

Speaking after the first innings, Ishan Kishan said that at a point in time 150 looked like par in a wicket that was gripping and turning from the start. The likes of Kagiso Rabada and Anrich Nortje troubled the Indian batsmen as well in the first few overs. However, the two openers stayed put and soaked in the pressure before cutting loose.
At the time of writing, South Africa were keeping up with the runrate and had scored 61 for the loss of two wickets in the powerplay.