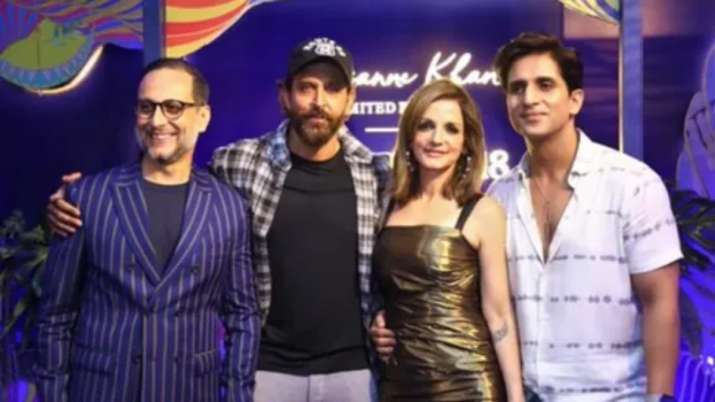 Bollywood actor Hrithik Roshan was seen cheering for his ex-wife Sussanne Khan for her new venture. Taking to social media, Hrithik shared Sussanne’s Instagram post where she had announced her new gig. Hrithik commented on her post by writing: “Huge congratulations Sussanne this was amazing!” He then also shared an Instagram story and wrote: “So so proud of Sussanne! You are a superstar.” In the video posted by Sussanne, the actor can be seen posing with his ex-wife and her rumoured boyfriend Arslan Goni.

Updating fans about the new venture, Sussanne had written: “Energy never lies. surround yourself with people who have good radiant energy and watch your world light up #AboutLastNight #Chivas18 #sussannekhan #limitededition #thecharcoalproject.”

The two chose separate lives in 2014 after being married for 13 years. Hrithik and Sussanne share two children.

Meanwhile, Hrithik also seem to have found love again. Recently, at Karan Johar‘s 50th birthday bash, Hrithik walked the red carpet holding his rumoured girlfriend Saba Azad’s hands. They made a dashing entry as they entered the venue together. The two also posed for shutterbugs gathered outside the party venue. In one of the viral videos, Hrithik is seen introducing sweetly introducing Saba to guests by telling them her name. The couple complemented each other by sporting black apparel. Saba dazzled in a black cut-out dress, while Hrithik looked dapper in a black suit.

On the other hand, Sussanne who also appeared at the party, attended the bash with her rumoured boyfriend Arslan Goni.

On the work front, Hrithik will be seen in ‘Vikram Vedha’, the Hindi remake of the Tamil superhit film by the same name. Hrithik will play Vedha in the film, a role enacted by Vijay Sethupathi in the original.