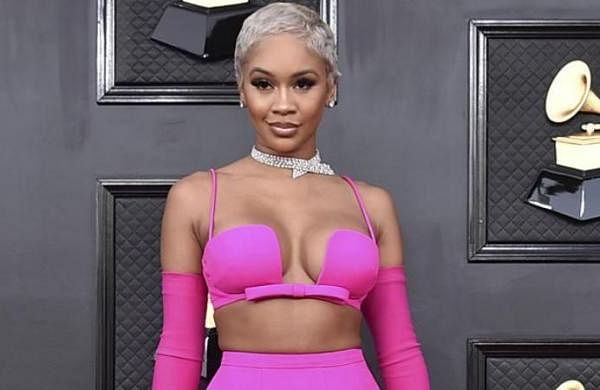 LOS ANGELES: Hip-hop star Saweetie’s father is African-American and her mother is Filipina-Chinese, and she says she saw racism first hand while she was growing up.

In an interview with ‘Glamour’ magazine, Saweetie, 28, explains she saw her dad being cowed by cops when he was ordered out of his car, reports femalefirst.co.uk.

She said: “It’s something that I’ve witnessed since I was a kid. I watched my dad get pulled over for no reason, get out of the car and him having to appear less of a man.

“He’s Superman to me, but when the cops come and pull him over, he has to confine to a certain type of submissiveness.”

She added: “It’s always angered me, experiencing that, watching the videos. But I’m actually thankful that we have phones now, because now the world is witnessing what Black and Brown and Asian communities go through behind the scenes.”

In the chat, Saweetie, whose real nameis Diamonte Harper, also spoke about the introduction of the Crown Act, which was introduced in California in 2019 prohibiting the discrimination against people based on their hairstyle and hair texture as she thinks it is a positive step.

The star insisted the law will be helping a lot of people, saying: “It’ll impact them (people living in the state) for the better. I know that a lot of women like us feel like they have to conform in the workplace.

“I don’t think that’s fair. Because whether your hair is straight, twisty or braided up, the work is going to get done regardless.”

She added of her own hair: “I hated my hair (when growing up), it’s naturally really kinky and curly. It’s beautiful, but I was a tomboy and was like, ‘I don’t got no time for this’.

“I was a year-long athlete, but I noticed that my hair was just so curly and wild that I didn’t need to do it at all. It was just pretty the way it was, I think just me playing a lot of sports and not having the time to do my hair, and seeing how loud it was, that’s when I really started to appreciate my hair.”