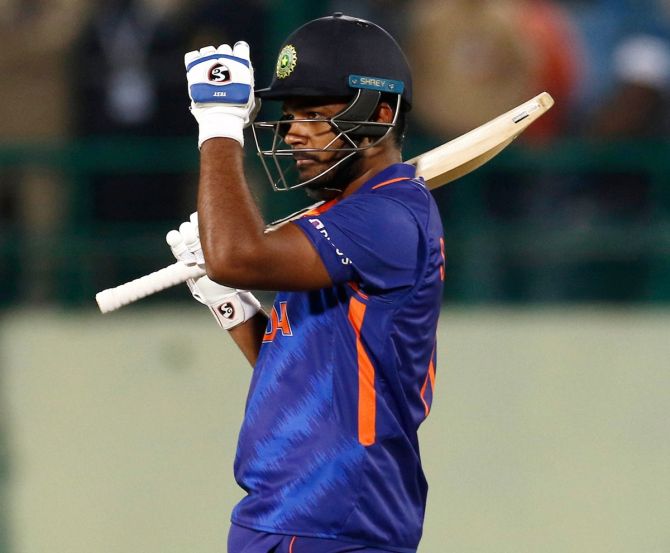 Legendary India all-rounder and 1983 World Cup-winning captain, Kapil Dev, has said that he is disappointed with “talented” wicketkeeper-batsman Sanju Samson because he lacks consistency.

Sanju Samson is considered one of the most talented modern-day wicket-keepers and he can win the games for his team single-handedly. Also, behind the stumps, he is very quick. However, he has been unable to score runs consistently, which has led to him being in and out of the Indian team.

India have several great options for the wicketkeeper-batter’s role, including the likes of Rishabh Pant, Ishan Kishan, Dinesh Karthik, and Sanju Samson.

Meanwhile, Kapil Dev believes that the veteran wicketkeeper-batsman Wriddhiman Saha is a better wicket-keeper than all four above-mentioned players. However, Dev admitted that Pant, Karthik, Kishan, and Samson are better batters than Saha.

“If you talk about wicketkeepers, all of them are almost same. But if you take about the better batter, on a given day all four can win you matches. If you talk about Wriddhiman Saha, he is better wicket-keeper than these four. But these four, as a batsman, are better,” Kapil Dev said in a discussion on Uncut.

I am disappointed with Sanju Samson – Kapil Dev

Legendary India all-rounder said that Samson is an exceptionally talented player but he does well in a couple of games and after that, he struggles for runs.

Kapil Dev added that Dinesh Karthik is ahead of all when it comes to consistency and mentioned that Ishan Kishan has struggled after getting picked by Mumbai Indians for INR 15.25 crore at the Indian Premier League 2022 mega auction.

“I am disappointed with Sanju Samson. He is so talented. He does well in one or two matches and then he does not do anything. If we talk about consistency currently, Dinesh Karthik is ahead of all. Ishan Kishan has, I think, come under pressure. Maybe it’s the pressure of the high price that he garnered at the IPL auction. I have never got so much money so I will not be able to say,” he said.

Former India captain further said that Karthik has not surpassed Pant in T20 cricket but he has forced selectors not to ignore him.

“I don’t think Dinesh Karthik has surpassed Rishabh Pant in T20s. But this time he has done so well that he forced selectors to not ignore him. Pant is a youngster who has lot of cricket left, then there is Karthik who has loads of experience. The more said about Karthik the less. He started before Dhoni and is still continuing,” he added.

Also Read: IND vs SA: We Talked About Execution And That’s What We Saw Today – Rishabh Pant