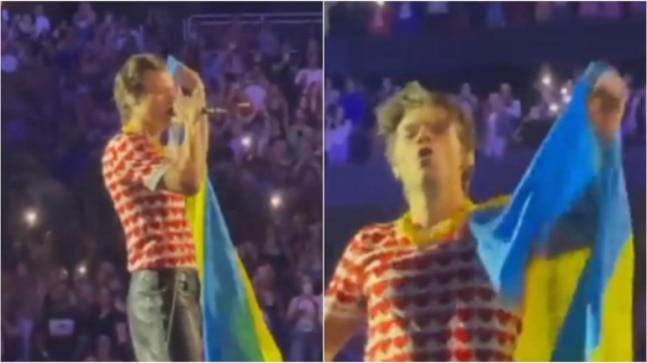 War-torn country Ukraine has been reeling under a major humanitarian crisis since Russian President Vladimir Putin announced the launch of military strikes into the country. Since February 24, there has been a wave of grim news pouring in from Ukraine. However, several people have come out in support of the country in a plethora of ways. And now, British singer Harry Styles showed his support by waving the nation’s flag at his latest concert.

Singer and songwriter Harry Styles performed songs from his newly-released album Harry’s House at his ‘One Night Only concert. The event was held at New York City’s Madison Square Garden on May 20. Towards the end of the night, he started performing his old hit ‘Sign of the Times’ and took the Ukrainian flag from one of the members of the audience.

The 28-year-old then performed his song, all the while carrying the flag on his shoulders while the crowd joined in to sing with him. The video of the entire moment was originally shared by a user, Maria Isabel Guedez, and was reshared by Adviser to the Minister of Internal Affairs of Ukraine, Anton Gerashchenko.

Harry Styles @Harry_Styles took to the stage with a #Ukrainian flag at a concert in New York during the performance of one of his top hits “Sign Of The Times” “
#StandWithUkraine
: @isabelguedez pic.twitter.com/eTe6pNc2JJ

Netizens hailed Harry Styles’s gesture and took to the comments section to share their thoughts and opinions.

“Amazing, such young artists with human values, decency, empathy towards the suffering of Ukraine! Gives me faith in our future! Thank you, such symbolic acts matter a lot, you influence youth, thank you,” a user wrote.

Thank you @Harry_Styles, we needs so much more of this in music and across the arts https://t.co/3ANedftWXr

Harry Styles with Ukrainian flag at a concert in New York! https://t.co/4JyRChMq4u

Amazing, such young artists with human values, decency, empathy towards the suffering ofUkraine! Gives me faith in our future! Thank you, such symbolic acts matter a lot, you influence youth, thank you

Today is the one of many days in war for Ukrainian.Every day is a fight, every day people of Ukraine bleeding.But for me as a @Harry_Styles fan today is way more better than others because of Harry’s pictures with Ukraine flag.#HarryStyles #Ukraine pic.twitter.com/ud8YSeSLrX

@Harry_Styles holding Ukraine’s flag and singing “Will we ever learn? We’ve been here before” was just so powerful to me.

What are your thoughts regarding this?