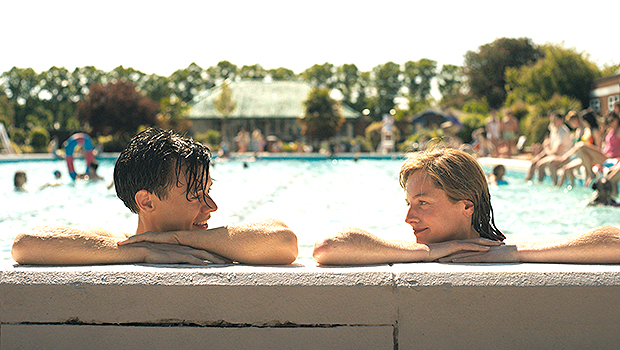 Harry Styles is a well-rounded talent! Besides being an amazing singer, the 28-year-old popstar has also been dipping his toes into the acting world. The first photos of him playing the police officer Tom Burgess in the upcoming romantic drama My Policeman were released on Thursday, June 9. Harry looked incredibly dapper playing the 1950s police officer.

The photos for the upcoming movie, which will hit Amazon Prime on November 4, showed Harry in a slick outfit, along with his co-stars David Dawson and Emma Corrin. As David (who plays Patrick Hazlewood) appeared to explain something in an art museum, Harry and Emma (who portrays Marion Taylor) listened intently. The “Watermelon Sugar” singer looked absolutely dapper in a gray sweater-vest over a tie with a dark blue jacket on, fitting for the 1950s look of the film. Another still shows Harry and Emma looking lovingly at each other in a pool.

The movie, which is based on Bethan Roberts’ 2012 novel, follows the love triangle between Tom, Marion and Patrick. Harry’s character is a gay police officer who weds Marion, because it’s “safer,” according to the book’s synopsis on Amazon. The movie will also feature Linus Roache, Rupert Everett, and Gina McKee playing older versions of Tom, Patrick, and Marion, respectively, per IMDb.

My Policeman isn’t Harry’s first feature-film role! He made his debut in the Marvel Cinematic Universe in 2021 as Eros in the film Eternals. He’s also set to star in his girlfriend Olivia Wilde’s upcoming thriller Don’t Worry Darling alongside Florence Pugh, Chris Pine and many more. The Harry’s House star explained how happy he was to work with his girlfriend in an interview on The Howard Stern Show. “I had a wonderful experience being directed by Olivia,” he said. “[Acting] requires a lot of trust if you want to kind of give it everything, and I think being able to trust your director is a gift, so that was very helpful.”