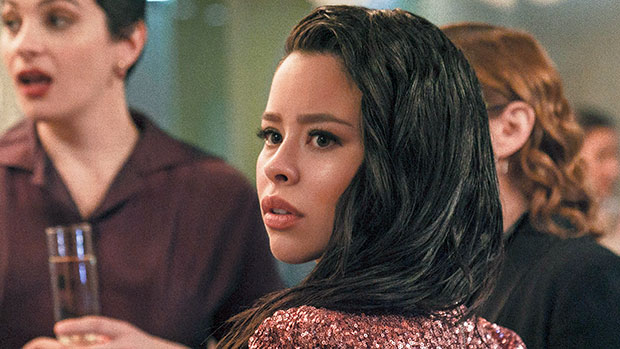 The drama keeps checking in at The Coterie. Good Trouble is back for new season 4 episodes, and the complications for Mariana, Gael, Davia, Dennis, Malika, Alice, and more just keep on coming. Mariana finds herself in a full-fledged love triangle with Evan and Joaquin, with the steaminess getting kicked up a notch with the latter.

“You did see in that trailer that Coterie relationships can get a little messy,” Cierra Ramirez told HollywoodLife EXCLUSIVELY. “I think Mariana does have a lot on her plate. Her heart is kind of all over the place. She’s a little confused, and she’s really bonded with Joaquin. They got really close over bonding about their sisters, and you’ve seen this kind of flirtation lead to something more. I think that there is definitely some chemistry there, but I think that there are a lot of other unanswered questions that we were left with that we need to get to.”

At the end of season 4A, a pregnant Isabella finally reached her breaking point with her parents and destroyed their car. Priscilla Quintana opened up about the fallout of Isabella’s decision and what that means for her future.

“I think that’s what we’re still in the process of discovering. We’re trying to figure out why she lashes out in the way that she does, and I don’t even think that she fully understands why she does the things that she does,” Priscilla said. “So that’s what I’m most excited about in the next season for her. In prior seasons, we’ve just seen her do these things, and then it kind of moves on. There’s really no clarification or understanding about why did she do that? What snaps there? What happened? She goes through some amazing therapy sessions and really starts to understand the root of herself and how that relates to her childhood and how she is now and how to fix it. I think it’s going to be a really, really interesting journey for her. But I will say, coming home from work and saying that I smashed a Maserati is one of the cooler things I’ve ever done in my career.”

Isabella and Gael are finally on the same page regarding their relationship. Tommy Martinez teased that Gael will be “trying his best to show how dedicated he is and supportive he is about the idea of being a father and being with her emotionally as well. I think he’s been trying his best, but he doesn’t realize certain things that are happening.” Meanwhile, Zuri Adele will be “raising the stakes in her life and in her environment. She’s riding the wave, and I hope you all enjoy it.”

‘Stranger Things 5’: The Release Date, Cast, The Spinoff & More You Need To Know

Rest assured, new fan-favorite Luca will be back in the second half of season 4. Emma Hunton opened up what’s next for Davia and Luca. “I think the thing that I love about Davia and Luca is that Davia is a fixer. Davia wants to help people. She wants to save people, and Luca is in a bit of a position right now where he needs to accept help. I think that is going to be a really interesting dynamic for them to watch develop over the season because Luca is not really someone who wants to ask for help. He’s very independent and very strong and a survivor. Davia is very privileged and comes in and is just like, please let me help you. I think it’ll be really fun to see his relationships with different Coterie members because it’s just clear that Luca is such a sweetheart and so likable. I think we’re going to watch everybody have a moment where they just fall in love with this character.”

As for the ongoing Dennis and Davia situation, Josh Pence noted that they are “certainly testing the boundaries and the limits of friendship and how much you can support somebody especially when a new person comes into the mix unexpectedly. But like always Dennis and Davia are so supportive of each other, almost to a fault, where you’re like, okay, we get it… I will say we’re pushing those limits, but hard work pays off. It definitely pays off.”

Alice went through quite the journey after being the victim of an anti-Asian hate crime in season 4A. Sherry Cola said that being able to explore this storyline with her character “means the world” to her. “We know how much the Stop Asian Hate movement really shook the Asian community, and the fact that Joanna Johnson honors that in our storytelling and sees how much I’m vocal in real life and puts those in the stories, it really means the world. Honestly, I’m just so proud to grow as an actor with the show. I think all of us can agree that this show has been life-changing,” Sherry told HollywoodLife. Good Trouble airs Thursdays at 10 p.m. on Freeform.