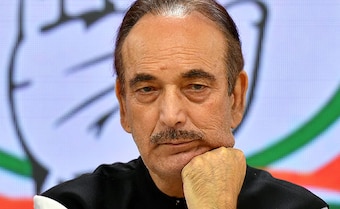 Ghulam Nabi Azad, 73, quit the party days after he rejected a key post in the Jammu and Kashmir Congress.

Ghulam Nabi Azad, who quit the Congress today with a scathing critique of the Gandhis, mainly Rahul Gandhi, is likely to launch a new party.

The former Jammu and Kashmir Chief Minister has been quoted as saying he would like to launch his party on his home turf.

“I will go to Jammu and Kashmir. I will form my own party in the state, will check on the national possibility later,” he was quoted as telling India Today.

Elections are due in Jammu and Kashmir later this year.

Sources close to Mr Azad say he is keen on marking his presence in the region ahead of the Jammu and Kashmir election.

Mr Azad, 73, quit the party days after he rejected a key post in the Jammu and Kashmir Congress, saying his recommendations for the organization had been ignored.

The veteran leader today slammed the Gandhis with a five-page resignation letter accusing Rahul Gandhi of “childish behaviour” and immaturity and of letting a “coterie of inexperienced sycophants” run the party.

The resignation comes ahead of the 2024 national election and amid signs that the election of a new Congress chief will be delayed yet again. Congress top leadership has announced a ‘Bharat Jodo Yatra’.

Mr Azad wrote he joined the Congress in Jammu and Kashmir in the mid-1970s, “when it was still a taboo to be associated with the party, given it’s chequered history in the state from 8th August 1953 onwards – the arrest of Sheikh Mohammad Abdullah being the nadir of it’s political myopia.”

The former Union Minister and Rajya Sabha member was one of the Congress’s senior most leaders and the party’s face in Jammu and Kashmir. He is among the few leaders to enjoy goodwill across the spectrum; Prime Minister Narendra Modi last year choked up during Mr Azad’s Rajya Sabha farewell.

Mr Azad later praised PM Modi during a speech in Jammu and said he hadn’t forgotten his humble roots even after achieving the top post.

Mr Azad was a leading member of the “G-23” or the group of 23 leaders who wrote to Sonia Gandhi alleging a leadership drift and urging major reforms.