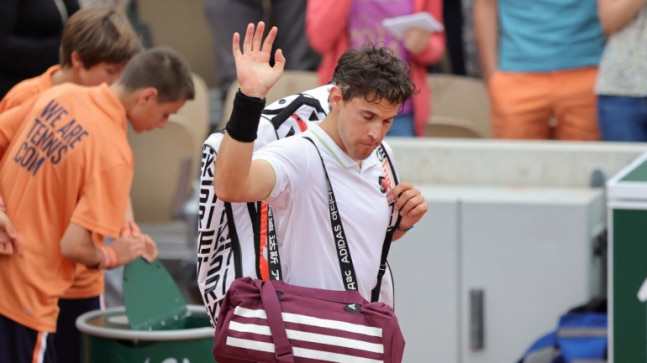 Two-time finalist Dominic Thiem suffered a first-round exit at French Open 2022, losing to World No. 87 Hugo Dellien of Bolivia 3-6, 4-6, 2-6 at Court Simonne-Mathieu in Paris on Sunday. Thiem, former World No. 3, was looking completely out of rhythm as the once-feared clay courter was knocked out of the Roland Garros on the opening day.

Thiem has lost all 7 matches and winning only one set in the ongoing season after having returned from a serious wrist injury. The Austrian has been struggling with his forehand, something that had served him wonderfully well in the past.

Thiem made 42 unforced errors on Sunday, looking like a shadow of the man who went toe-to-toe with Rafael Nadal, reaching the final of the French Open in 2018 and 2019.

Dellien, comfortable on the surface after battling through the qualifiers to reach the main draw in all five claycourt tournaments preceding Paris, did not have to wait long for his chance.

He earned his first break point in Thiem’s opening service game and broke him on his second to race through the first set.

Two quick breaks in the second wrapped it up for Dellien, with Thiem, who injured his wrist in Mallorca in 2021 and required surgery, struggling with consistency throughout.

Meanwhile, 18th seed Grigor Dimitrov progressed to the second round at Roland Garros with a comfortable 6-1, 6-1, 6-1 win over World No. 57 Marcos Giron of the United States.

Roland Garros witnessed the first big upset as early as the opening day as World No. 6 Ons Jabeur, who had been in stunning form on the red dirt, was shocked by World No. 6 Magda Linette of Poland in the women’s singles opening round at the Philippe Chatrier arena.

Ons Jabuer, who was earmarked as one of the favourites to win the Roland Garros, headed to Paris with the most wins on clay for a women’s singles player this season but her campaign came to an early end.