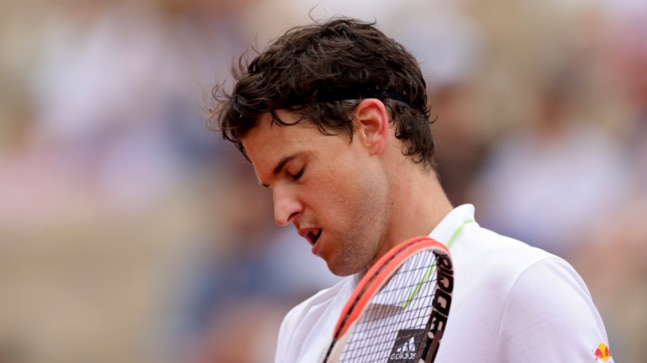 French Open 2022: Dominic Thiem said he is planning to play Challengers to make sure he gets some winning momentum under his belt while ruling out pain due to the wrist injury he had been suffering from.

Former World No. 3 Dominic Thiem said he was not surprised by his first-round exit from French Open 2022, adding it will take him a bit more time to return to his best after returning from a wrist injury that kept him out of action for a considerable period of time.

Dominic Thiem, who went toe-to-toe with Rafael Nadal during his run to the French Open final in 2018 and 2019, looked a shadow of his imposing clay-court version as he lost to Bolivian world number 87 Hugo Dellien on Sunday in Paris.

It’s been a struggle for Thiem since his comeback to the tour from the wrist injury as he has not managed a single victory. Thiem has lost all 7 matches he has played in 2022 and managed to take only one set so far.

Thiem said he is pain-free but he needs to get more match practice to improve his confidence and start winning again.

“It was not a good match at all but it is what it is. I knew it would take time and the level is extremely high. It is going to take a few more months until I say now I am ready to beat those guys again,” Thiem said after his defeat in Paris on Sunday.

Thiem was struggling throughout the match, failing to even hit forehand winners something that was his forte before the injury setback. The Austrian, who has slipped to 194 on the ATP charts, said it’s time for him to play some Challengers to regain the winning form.

“The problem is in practice it is really decent but a match situation is something different, Grand Slam especially. I am definitely thinking to go back to Challenger level for one or two tournaments,” he said.

“I am more tight, more nervous and the whole body gets more tight. This is toxic to my forehand because I am still missing the fine feeling there,” he added.