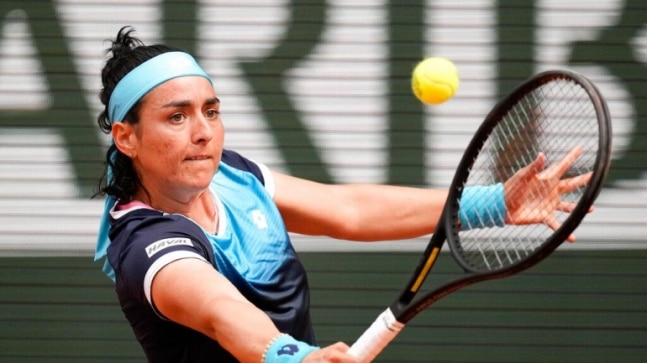 World No. 6 Ons Jabeur said she was disappointed after suffering an early exit from French Open but stressed that she is not willing to look down on her stunning run on clay in 2022. Jabeur made waves on the red dirt, winning the Madrid Open and reaching the final of Italian Open Masters 1000 tournament.

Ons Jabeuer was billed as one of the favourites to go the distance at Roland Garros but the in-form player lost her women’s singles opening round at the Philippe Chatrier to World No. 56 3-6 7-6(4) 7-5 to Poland’s Magda Linette. Jabuer had won 17 matches on clay in 2022 but she was unable to get past the opening hurdle in Paris on Sunday.

“I wanted to go as far as I could in the tournament because I played well on clay in Madrid and in Rome, and it’s difficult to take that one in,” Jabeur said on Sunday.

“But that’s what sport is like and you need to be smart enough to move forward and get back on court. So maybe it was a good thing to lose today.

“I would rather say this and be really tough with myself than waste all the good energy that I got from Madrid and Rome.”

Jabuer looked like she would sail through to the second round when she took the opening set 6-3. However, as Linette scripted an inspired fightback, Jabeur’s frustration grew as the unforced errors crept in. The Tunisian was not happy with her showing as he vented out her frustration by icking the ball out of the court on a couple of ocassions.

“First set was good enough for me, the second set I didn’t have the opportunity to break her during the serve, which made it very difficult for me to stay in the match, but the third set obviously it was a lot of momentum, a lot of frustration. But that’s tennis and I’ll have to accept today that I lost and get back and training and get ready for the grass season,” Jabeur said.

Notably, Linette had beaten Jabeur in the first of their four meetings back in 2013 before Sunday. She had also lost to the Tunisian star at last year’s French Open but it was payback time for the Polish player.

“I lost to her last year here, and then this year in Miami, and so I kind of knew what to expect,” Linette told reporters.

“I knew that she was really on fire this time and I would really need to play point by point, be really mentally tough. I’m really happy that I managed to stay really calm and strong.”

Linette will next play Martina Trevisan of Italy or Briton Harriet Dart.