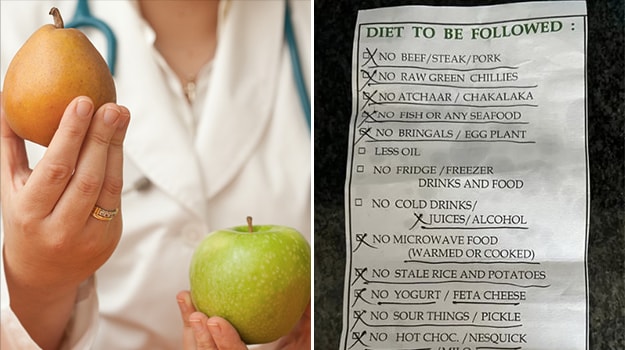 Weight loss isn’t an overnight achievement but a journey that we have to take on. Dietitians and nutritionists often say that you have to choose the right kind of foods for every meal and every snack so that your weight loss journey gains momentum. It is always a good idea to consult a qualified medical practitioner before making any kind of changes to your diet. Recently, however, a doctor’s long list of foods prohibited on a weight loss diet went viral on Reddit. The long list had a variety of foods that made sense to be avoided; the others just seemed to be unnecessary. Take a look:

(Also Read: 10 Mistakes To Avoid When You Are On Weight Loss Diet)

The post was shared by u/Ammar0301 in the sub-Reddit r/mildlyinfuriating. “Doctor gave a list of things not to eat to lose weight/maintain good health. It gets worse as the list progresses,” wrote the user in his post. The picture of the list of foods to avoid for weight loss went viral on Reddit, garnering over 60k upvotes and 11k comments at the time of writing.

In the picture, we could see an absurdly long list of foods under the heading “Diet to be followed”. Red meats such as steak and pork were prohibited on the list, as were fish and other seafood. Even vegetables such as brinjal, lettuce, cucumber, stale rice and potatoes were disallowed by the doctor. Further, the weight loss diet prescribed avoiding food that was stored in the refrigerator or heated in the microwave. It truly doesn’t get more bizarre than this.

Reddit users too shared their appalled responses to this post. “This list looks like either Ayurvedic diet and/or IBS/Crohn’s diet recommendations,” wrote one user while another said, “Can’t have cold water, you warm that up first or you’ll get fat!”

Take a look at the hilarious reactions:

This is not the only bizarre post that has left Reddit users in shock. Recently, a recipe for ‘Coca-Cola Salad’ had taken the platform by surprise. The strange creation was made with ingredients like coca-cola and cream cheese.

Click here to read more about this bizarre Coca-Cola salad.

About Aditi AhujaAditi loves talking to and meeting like-minded foodies (especially the kind who like veg momos). Plus points if you get her bad jokes and sitcom references, or if you recommend a new place to eat at.