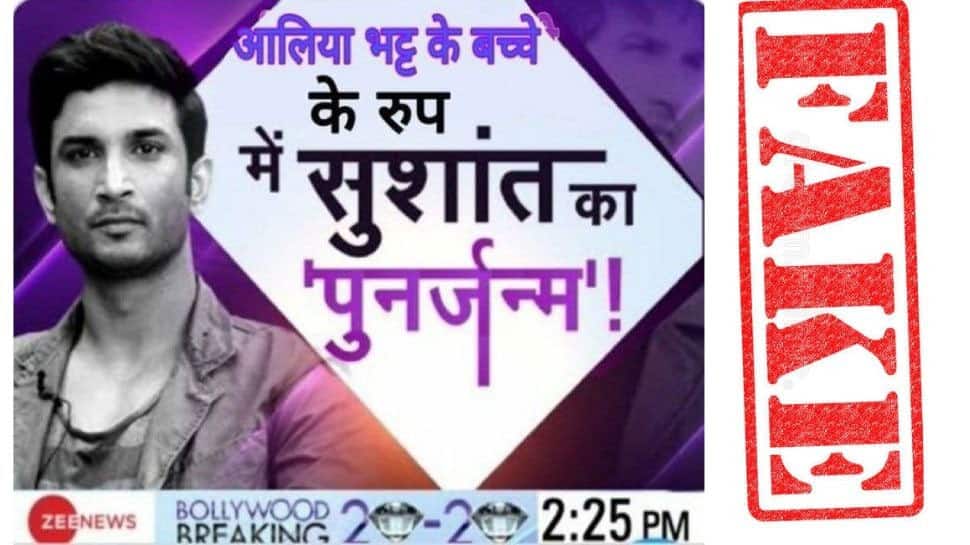 New Delhi: A fake screenshot alleging a Zee News report on Alia Bhatt and Ranbir Kapoor’s first baby is doing the rounds. It relates to the actress’s baby announcement with late actor Sushant Singh Rajput’s rebirth. Zee News would like to state that the circulated screenshot is fake and no such programme or news report was carried by the channel or its digital space.


The viral screenshot with the channel’s logo is fake and should not be misconstrued.


For the unversed, Alia Bhatt surprised her fans with the baby arrival announcement on June 27, 2022. The actress took to Instagram to share the good news. In the photo Alia can be seen lying on a bed and Ranbir is sitting next to her. Both of them are glued to the screen that shows the ultrasonography of their upcoming baby. To express her emotions, animal lover Alia shared a second photo of a lion and lioness with their cub. “Our baby ….. coming soon,” Alia captioned her post along with infinity, red heart and stars emoji.


Alia and Ranbir tied the knot in an intimate ceremony on April 14, 2022, at RK’s residence in Bandra. The couple had been dating for five years before getting hitched.

Almost entire Bollywood wished the couple on hearing their good news. From Karan Johar to Priyanka Chopra, family members including Soni Razdan, Neetu Kapoor, and Riddhima Kapoor Sahni among others expressed happiness over the baby news.