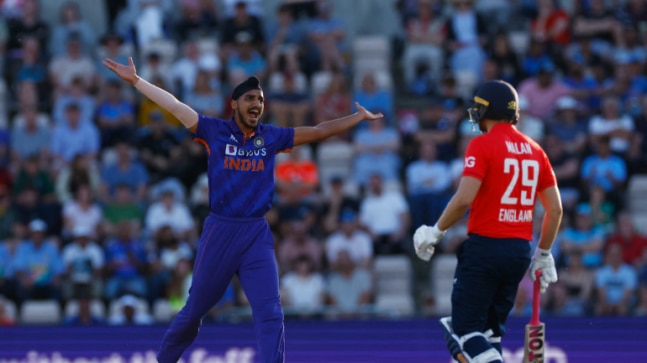 India dropped six catches on the night, but were left unscatched as a meek display from the English batting line-up could not harm India.

Indian fans were left frustrated by the standards on India fielding on the night after Rohit Sharma’s men dropped six catches while defending 199 runs against England in the first match of the white-ball series against England. Fresh from the victory in the Ireland series, Hardik Pandya continued his stunning form with a half century and four wickets to break the back of England.

The Rohit Sharma-led team began the game in a dominating fashion with batsmen getting rapid starts in a great batting track at Southampton. The assault was of course led by Hardik, who reached his maiden T20I fifty. He stitched two important partnerships with Suryakumar Yadav and Axar Patel and kept India’s run rate above 10 per over for most part of the innings.

With 198 scored from 20 overs, India started brilliantly in the second innings with Bhuvneshwar Kumar removing Jos Buttler in the first over. From there, Hardik Pandya picked three more in his first two overs and had England reeling inside the first seven over of the game.

India could have done far better, if catches would have stuck on the day. The team kept dropping regulation chances – six of them for that matter, with Dinesh Karthik leading the pack with three drops. Barring Karthik, Deepak Hooda, Suryakumar Yadav and Yuzvendra Chahal dropped one each.

Exhibition of dropping catches tonight by Team, seems there is competition as to who can drop the most simplest of catch. #INDvsENG

Worst fielding ever by Indian team.. can’t drop too many catches #IndiaVsEnglandT20onSonyLIV

Chahal dropped of his bowling then easiest if lot Hooda drops in the same over. In total 6 drop catches.

India fans reacted in the social media over the matter and pointed out the poor standards of fielding.
It did not matter in the end, as the bowlers kept coming at the England batters, who folded for 148 with three more balls to go in the second innings.