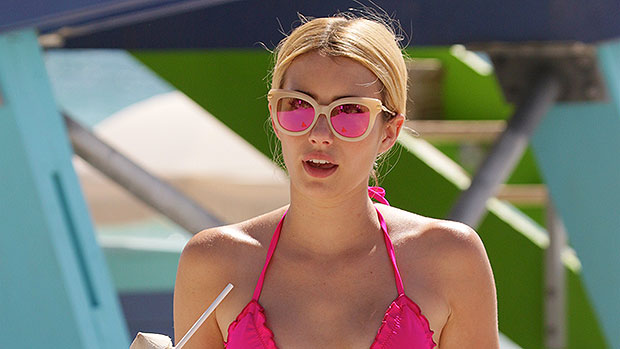 Emma Roberts glowed in a yellow bikini! The actress, 31, looked gorgeous in the balconette floral top by Peony Swimwear ($105) as she lounged on a yacht in her Instagram photo posted on Thursday, Aug. 25. She added the matching Daffodil Aftersun hat to the look, along with a breezy pair of loose white pants by Doen and sunglasses. The blue ocean could be seen behind her as she perched herself on a sunbathing area to the side of the vessel, which could also be used to jump into the water.

The Scream Queens alum quoted the book Tithe in her caption, seemingly capturing her feelings of the day. “’She loves the serene brutality of the ocean, loves the electric power she felt with each breath of wet, briny air,’  –Holly Black” the quote read. The 2002 book, written by Holly, is a young-adult fantasy novel that’s part of the best-selling Folk of the Air series.

Her 18 million followers were loving the summer snap, and showed plenty of love in the comments. “love u pretty girl,” one fan penned, while others added, “You are so gorgeous” and “Beautiful.”  Emma, who is the daughter of Eric Roberts, was looking so much like her Oscar-winning aunt Julia Roberts in the photo!

The New York native (who later moved to Los Angeles as a teen) appears to be on a getaway, which she shared snaps of to her Instagram story. Emma glowed in a makeup free selfie as she laid back on a leopard and strip printed chair on the yacht, capturing the postcard worthy sunset behind her. The mom-of-one went closer up on the next, showing off the sunglasses resting on her head and her button down white shirt. In a third image, Emma appeared to be getting ready for some sort of excursion in a full-on bodysuit with orange helmet!