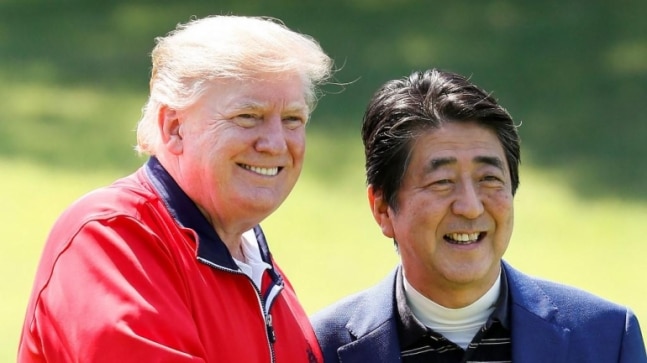 Former US President Donald Trump said he was absolutely devastated on learning of the attack on ex-Japanese Prime Minister Shinzo Abe, who is in critical condition after being shot in the chest.

Abe, 67, was shot by a gunman while campaigning for the upcoming parliamentary election in the city of Nara, Japan. He is currently hospitalised and doctors are fighting to save his life, according to a statement by Japanese Prime Minister Fumio Kishida.

Expressing his shock over the incident in a statement on his social media app, Truth Social, Trump said, “Absolutely devastating news that former Prime Minister Shinzo Abe of Japan, a truly great man and leader, has been shot, and is in very serious condition.”

He went on to add that Abe “was a true friend of mine and, much more importantly, America. This is a tremendous blow to the wonderful people of Japan, who loved and admired him so much. We are all praying for Shinzo and his beautiful family!”

Trump and Abe had interacted on several occasions from bilateral meetings to global summits — while the two men were in office. In one memorable interaction between them at the White House in February 2017, the reality TV star-turned-president grasped Abe’s hand in his trademark bizarre handshake and let go only after several long moments, leaving the Japanese premier rather bemused. At the time, the video of the awkward exchange went viral.

However, Trump has apparently held Abe in high regard for quite some time. During a phone call between the two leaders in August 2020, Trump, the then US president, called Shinzo Abe the greatest prime minister in Japanese history. Their conversation took place after Abe announced his decision to step down as PM due to health concerns.

According to a statement by the White House, Trump complimented Abe further, saying he had done a “fantastic job” and that the relationship between the US and Japan was stronger than it had ever been.