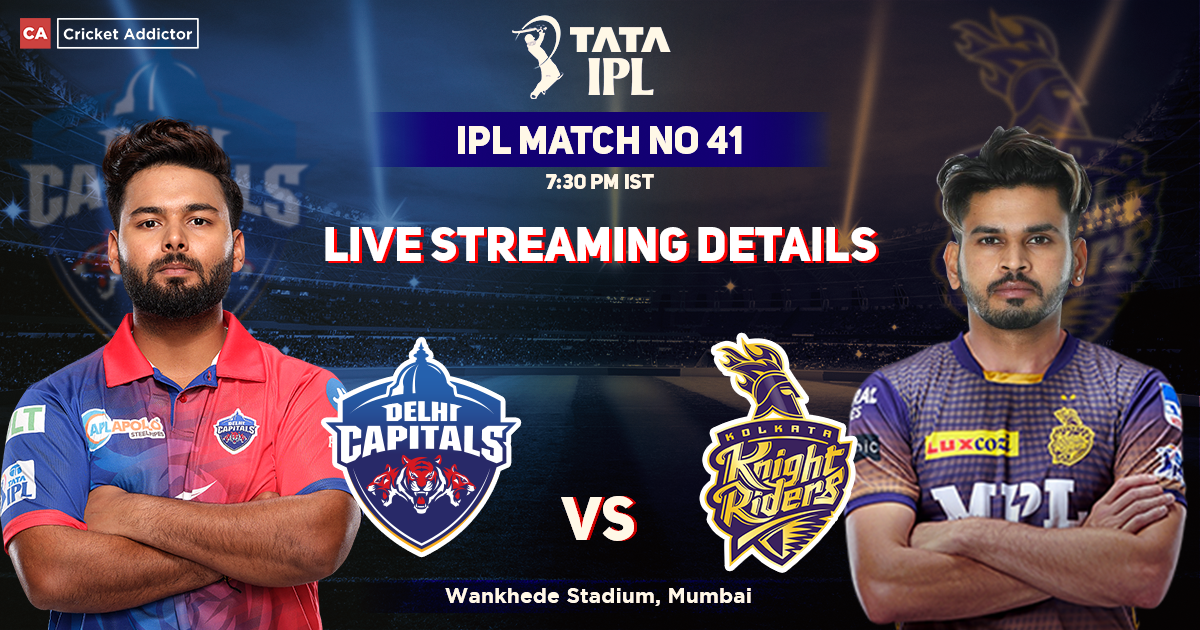 Delhi Capitals vs Kolkata Knight Riders Live Streaming Details: When And Where To Watch DC vs KKR Match Live In Your Country? IPL 2022, Match 41, DC vs KKR. Delhi Capitals, placed 7th in IPL 2022 points table can consider themselves unlucky in the last game against Rajasthan Royals when they missed crossing the line with a whisker.

They will now take on one of their former skipper Shreyas Iyer’s Kolkata Knight Riders, placed 8th in match no 41 of Tata IPL 2022 on 28th April at 7:30 pm. Wankhede Stadium in Mumbai will be hosting this match.

Both teams will be looking for a win desperately as they want to get into the playoffs before things get out of their hands. Delhi with 3 wins and 4 losses from 7 games is placed 7th but has the best net run rate this season compared to any other team. This is definitely an advantage for the Delhi Capitals but they would want some more winnings against their name.

The Shreyas Iyer-led team Kolkata Knight Riders showed prominence in the opening few games but suddenly has lost momentum and now found themselves in a hollow space with 3 wins and 5 losses from 8 games. Kolkata Knight Riders are struggling to find a perfect combination even after 8 games. The likes of Nitish Rana, Venkatesh Iyer, and Varun Chakravarthy have been total failures, and this is hitting Knight Riders hard.

Delhi Capitals’ bowling took a toll against Rajasthan Royals as RR batters Jos Buttler (116), Devdutt Padikkal(54), and skipper Sanju Samson(46*) made a mockery of DC’s bowling attack. The Capitals are definitely missing the services of their express Proteas pacer Anrich Nortje who still isn’t 100% fit. The Indian bowling contingent of DC isn’t an experienced one but they have to put up a better show against KKR if they want to progress to the playoffs.

Lalit Yadav is a handy off-spinner but he isn’t handy with the bat at the lower order when the batters have to go berserk. His inability to hit the long ball might force Delhi Capitals team management to look beyond him and bring someone like Ripal Patel who is a brilliant striker of the cricket ball and a handy medium-pacer too. Also, Delhi Capitals might try someone like Yash Dhull or Kona Srikar Bharat in place of Sarfaraz Khan.

Delhi Capitals have been too reliant on their openers David Warner (219 runs, 3 fifties) and Prithvi Shaw (254 runs, 2 fifties) in their batting. Rishabh Pant has played some good cameos but is yet to make a fifty so far. Rovman Powell will be needed to play a big role in the middle order alongside all-rounders Lalit Yadav, Axar Patel, and Shardul Thakur.

Spinner Kuldeep Yadav (13 wickets) and pacer Khaleel Ahmed (11 wickets) have been Delhi Capitals’ main wicket-takers this season so far. Axar Patel, Mustafizur Rahman, and Lalit Yadav have chipped in with wickets and have kept the batters silent with economy rates under 8 per over. Shardul Thakur has been going at an economy rate of 9.6 runs per over and will be looking to make a comeback with the ball in this match.

KKR made a tough call of benching Pat Cummins in the last game. It was a gamble, but it definitely paid dividends with Tim Southee making the most of the opportunity. With the likes of Venkatesh Iyer, Varun Chakravarthy, and Nitish Rana too facing the heat, KKR needs to make some tough calls.

Varun Chakravarthy’s space in the eleven is definitely under the scanner. Aman Khan, Anukul Roy, or Harshit Rana could come in for the mystery spinner who has been totally out of sorts this season.

Kolkata Knight Riders batters have not been able to perform consistently with skipper Shreyas Iyer (248 runs) and Andre Russell (227 runs) being the top run-scorers. Nitish Rana and Ventakesh Iyer have made very less effect barring a solitary fifty. Aaron Finch and Sheldon Jackson might be included at the expense of Sam Billings and Rinku Singh in this match.

Sunil Narine has an impressive economy of 5.37 runs per over. Tim Southee has been excellent picking up 8 wickets in just 3 matches. Andre Russell is taking vital wickets in death but is giving away runs at over 10 runs per over. Umesh Yadav, KKR’s leading wicket-taker this season seems to have lost a bit of rhythm from the excellent season start while Varun Chakravarthy is having a disastrous season.

Delhi Capitals vs Kolkata Knight Riders Live Streaming Details: When And Where To Watch DC vs KKR Match Live In Your Country? IPL 2022, Match 41, DC vs KKR

Fans can watch the online live streaming of the match on the Disney+ Hotstar app. However, viewers need a premium subscription to watch the matches live on the app.

In African regions including countries like South Africa and Zimbabwe, the match will be telecast on SuperSports Cricket.

In the United Kingdom (UK)

Sky Sports will present the live telecast of the match in the United Kingdom.

In the Caribbean islands, Flow Sports will telecast the match. The live streaming will be available on the Flow Sports app.

In the United States

The match will be available to watch on Willow TV in countries like the United States and Canada.

In Australia, Fox Sports (Fox Cricket) will present the live-action of the match.

In New Zealand, Sky Sport (Sky Sports Cricket) will present the live-action of the match.