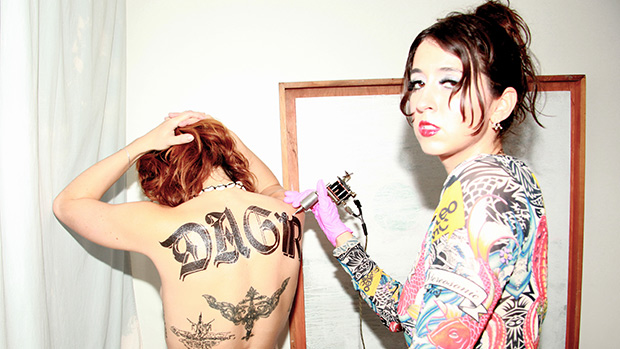 We find ourselves at the side of a Los Angeles highway at the start of “Café Racer,” the new single and video from DAGR. However, the lime green truck hasn’t broken down. It’s actually parked for a “beachside” bash, with hotdogs, bikinis, and an inflatable pool. What follows is a gleefully filthy romp through Southern California. A longhaired man views his kingdom from the wall-sized window of his concrete castle. A man irons his shirt at midnight. Rebecca Black, in latex, leather, and lace, writhes in the back of the truck while singing the chorus. Haircuts are given, and everyone comes out looking sharp.

The “Café Racer” video could be considered a victory lap for that society might deem “unconventional.” The band shares that the video “started as an open-ended Craigslist post” and eventually “led to an unmistakable love letter to the absurdity of Los Angeles. The video is hot, scary, & hysterical– our project in a nutshell.” It is indeed a bilingual bash, thanks to LVL 1’s Spanish-language verse, and DAGR (Ceci G and Veronica Jane) tells HollywoodLife that this is “one of the most fun songs off of our new album to make because it’s an unapologetic club banger for the gays and classic motorcycle enthusiasts.”

As DAGR, the LA-via-TX queer artists have worked alongside artists like UPSAHL, Uffie, and King Princess. Their resume will grow with the release of Fade On Black, their new collection of music. It drops on July 29 and features their collaborations with Bayli, LYAM, & MaikoMaiko (“Mind Games”), Lunice (“Dumb 150”), and Portugal. The Man (“Caravan”).

DAGR is “a space for us to explore a really saturated version of what we like about pop, hip hop, and dance music,” the duo said in their interview with The Luna Collective. “We lean towards aggressive, hard-hitting production that is sometimes a little weird and unsettling. Writing songs outside of an artist’s focus is really liberating, as we work full time on producing and writing for other artists. Diving into DAGR helped us isolate and identify our own sound as Veronica and Ceci.”

Be ready to have Fade On Black on repeat when it arrives at the end of July. Race to be the first one blasting it out of your own lime green whip.

Lily Meola: 5 Things About The Standout Singer Auditioning For ‘AGT’