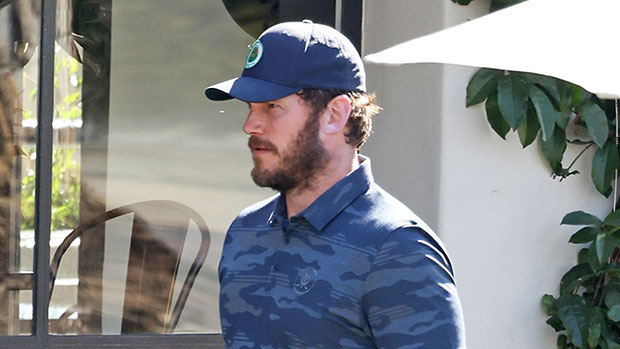 Chris Pratt, 43, doesn’t need a gym to work out! The actor was photographed doing push-ups on the ground of a gas station in Santa Barbara, CA on Thursday as he was filling his car up with gas. It’s not clear how many he did, but he was fully committed as he focused carefully on the moves while both hands were on the concrete.

He wore a blue short-sleeved top with a camouflage print, black shorts, and a blue baseball cap, during the outing. His wife, Katherine Schwarzenegger was also reportedly on the trip as she sat in the passenger seat. After filling the car with gas, the lovebirds headed over to Cat Cora’s Mesa Burger, where he picked up what appeared to be two bags full of food.

One day after his push-up filled outing, Chris was spotted on another outing. He was shopping at Clic at the Montecito Country Mart and pumped his gas again. He looked relaxed and content as he took in the warm weather in the area.

Before Chris’ latest two outings, he made headlines for sharing a sweet tribute to his son Jack, whom he shares with ex Anna Faris, on his 10th birthday. “Happy Birthday to my first born, my smart, handsome, kind hearted, big boy Jack!” he wrote alongside a photo of a sheep and lamb. “TEN!!?? WHAAAT!? Double digits!! Hard to believe it’s already been ten years!! You’re the best son, big brother, fisherman, scout, reader, mathematician, imagineer, builder, boxer and buddy a guy could ask for. Love you kid!”

In addition to Jack, Chris shares daughters, Lyla, 2, and three-month-old Eloise with Katherine. The proud parents often share the love for their children on social media, but have kept their faces private for their own safety. They do, however, show adorable glimpses of the back of them or other parts, like their feet, whenever they want their fans to take in the joy they’re feeling.

‘Guardians Of The Galaxy 3’: The Cast, Release Date, & More