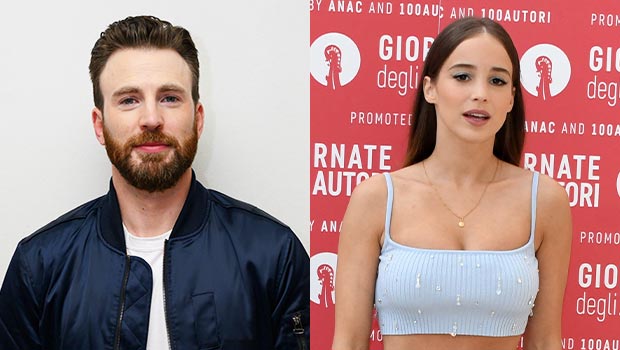 Chris Evans has gone Instagram official with actress Alba Baptista! The 41-year-old Gray Man actor took to his Instagram Story on Jan. 6 to share a hilarious video compilation of the pair scaring each other throughout 2022 from behind walls and around corners, as seen below. The video included eight jump scares, and by the last one, Alba, 25, was seemingly better at preparing herself for the unknown. The footage showed her timidly walking toward a door before Chris startled her. “I knew it!” she exclaimed after he jumped out at her.

“A look back at 2022,” Chris wrote at the top of the video, alongside three heart emojis. He did not tag the Portuguese actress, as her Instagram appears to have been deactivated. While it was still up in Nov. 2022, Chris made headlines for leaving a flirty comment under her post promoting her 2022 film, Mrs. Harris Goes to Paris. He left a melting emoji, showing that he was simply melting for her. How cute!

Chris and Alba’s relationship made headlines in Nov. 2022 just days after Chris has been named PEOPLE‘s 2022 “Sexiest Man Alive”. A source for the outlet claimed the pair had been in a “serious” relationship for more than a year at that point. “They are in love and Chris has never been happier. His family and friends all adore her,” they divulged. Although the relationship was confirmed in November, some fans speculated something was going on between the two actors as early as Jan. 2022.

Chris discussed feeling ready to settle down and start a family with the woman of his dreams in his “Sexiest Man Alive” interview, but kept his lips sealed about a woman already being in his life. “That’s absolutely something I want: wife, kids, building a family,” he told PEOPLE. “When you read about most of the best artists, whether it’s actors, painters, writers, most of them [admit] it wasn’t the work they made [that they are most proud of], it was about the relationships; the families they created, the love they found, the love they shared.”

Chris has been linked to several actresses over the years, including Jenny Slate, Jessica Biel, and Minka Kelly. He is also thought to have dated Kate Bosworth, Christina Ricci, Dianna Agron, and Lily Collins.