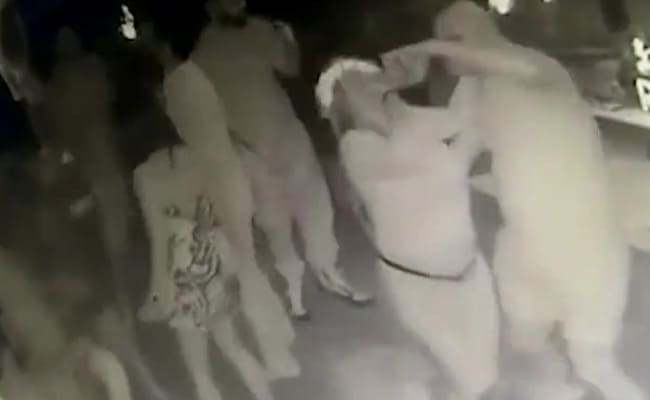 Sonali Phogat was seen in the CCTV footage with her associate Sudhir Sangwan.

A day after security camera footage showed actor and BJP leader Sonali Phogat staggering on her way out of a nightclub in Goa, hours before she was declared dead, a new clip has emerged that shows her being forced to drink on the dance floor.

The man in the video appears to be Sudhir Sangwan, one of her two associates who have been arrested as the police investigate the murder case. He was also seen in the other clip that emerged a day ago, helping her out of the club Curlie’s.

Police had referred to this clip when they said they had footage showing Sudhir Sangwan making Sonali Phogat forcibly drink “some substance”. According to them, the associates took her to the hotel, Grand Leonny, where all of them were staying, before she died.

“CCTV recordings of relevant premises were examined by the Investigating Officer, and it was found that Sudhir was forcefully making Sonali to drink the alleged liquid in a water bottle,” a police statement read.

When she was brought dead to a hospital in Anjuna, North Goa, the next morning, it was initially seen as a case of heart attack. But her family sensed something amiss and demanded a thorough probe.

After Haryana Chief Minister Manohar Lal Khattar intervened as well, police filed a murder case. In her post-mortem report on Thursday, it came to light that “there are multiple blunt force injuries over the body”. The report said police need to investigate the cause of death.

Police on Friday said finding the cause “would take a while… only after chemical examination of viscera” and other tests. The viscera would be examined at a state facility in Chandigarh too, besides in Goa, as per the family’s demand.

Haryana Chief Minister Khattar on Thursday said he is open to handing the case over to the Central Bureau of Investigation. Sonali Phogat’s family has alleged rape as well, but police haven’t yet pressed those charges, pending further investigation.

After Sudhir Sangwan and the second associate, Sukhwinder Singh, the police on Saturday arrested two more people in a drugs case that has been registered following the 42-year-old BJP leader’s death. The latest arrests were Edwin Nunes, the owner of Curlie’s, and a drug dealer identified as Dattaprasad Gaonkar. Both have been named as accused in the drugs case.