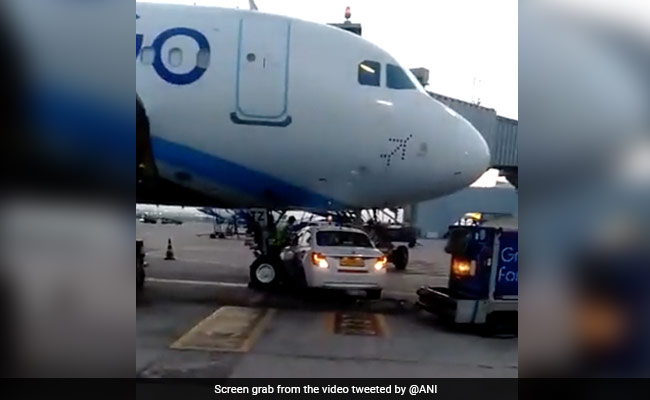 The plane departed for Patna on schedule.

The driver of the car that narrowly avoided a collision with an IndiGo plane’s nose wheel today may have been overworked and accidentally came near the aircraft, sources in the aviation regulator said, citing initial investigations. Ground incidents do happen once in a while and fortunately, this was harmless, they said, adding that sometimes it does result in damage to the aircraft.

The driver was subjected to Breath Analyser (BA) test for consumption of alcohol and it has been found to be negative. There was no damage to the aircraft or injury to any person.

The incident was caught on camera.

The Directorate General of Civil Aviation or DGCA – the civil aviation regulator – will investigate the incident that happened at Delhi Airport’s T2 terminal, its officials have said.

The IndiGo aircraft was readying to depart for Patna this morning when a Swift Dzire car belonging to Go First airline went under it, narrowly avoiding collision with the nose wheel.

The plane departed for Patna on schedule.