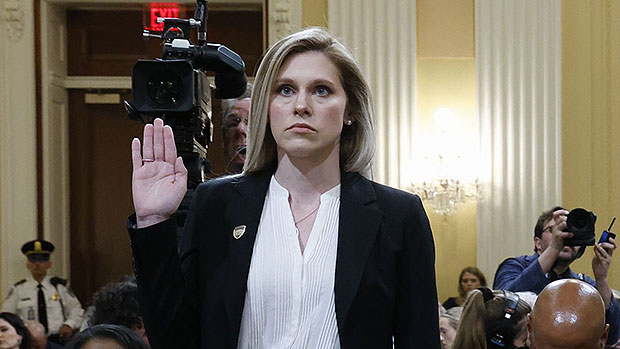 Capitol police officer Caroline Edwards revealed that she slipped in blood, as she fought back rioters supporting former President Donald Trump’s during the January 6 invasion of the Capitol, during her testimony before the House Select Committee on Thursday, June 9. At the end of her testimony, committee chairperson Rep. Bennie Thompson asked Edwards to describe what she remembered the most from that day, and she spoke about how gruesome the fighting was. She explained how unbelievable the scene was. “what I saw was just a war scene. It was something like I’d seen out of the movies,” she said.

Capitol Police Officer Caroline Edwards testifies: “What I saw was just a war scene. There were officers on the ground, they were bleeding, they were throwing up…I saw friends with blood all over their faces. I was slipping in people’s blood.” pic.twitter.com/pljbZMs6cV

Edwards continued to explain the toll that the attack was taking on her fellow officers, including vomiting and bleeding. “There were officers on the ground,” she said. “I saw friends with blood all over their faces. I was slipping in people’s blood.”

She continued to explain just how unbelievable the violence was, saying that it was “chaos” and “carnage.” Edwards continued by saying that she felt like she was unprepared for everything that ensued at the Capitol. “I never in my wildest dreams did I think that as a police officer, as a law enforcement officer, I would find myself in the middle of a battle,” she said. “I’m not combat trained, and that day, it was just hours of hand-to-hand combat.”

Edwards concluded by likening what she saw to a “war zone.” After she finished, Thompson thanked her for defending the Capitol, and he commended her for protecting democracy. “If you and your fellow officers hadn’t held the line against those violent insurrectionists, we can only imagine the disaster that would have ensued,” he said. “We wish you a continued recovery and look forward to seeing you back in uniform sometime soon.”

The January 6 attack on has led to many questions in the year and a half since it took place! Many have blamed Trump for inciting the riot by spreading misinformation about the 2020 election, wrongfully saying that he was the winner, not President Joe Biden, who was fairly elected. The former president’s involvement in the attack led to him being impeached for a second time, although he was acquitted again.

Many people have called for justice and for those involved in the insurrection to face consequences, with some even suggesting that the former president should also be charged for his involvement in the riot. While it’s not clear what will come out of the Select Committee, hopefully, it will shed more light on how and why the insurrection happened!

While many people have sought answers for the insurrection, some Republicans have come under fire for trying to move past it. Even Trump has released statements attacking the committee and kept on spreading the lies that the election was rigged. After Biden gave a speech commemorating the one-year anniversary of the attack, Trump released a statement going after the committee, questioning why they weren’t investigating the election. “Why is it that the Unselect Committee of totally partisan political hacks, whose judgment has long ago been made, not discussing the rigged Presidential Election of 2020? It’s because they don’t have the answers or justifications for what happened. They got away with something, and it is leading to our Country’s destruction. They want all conversation concerning the Election ‘Canceled.’ Just look at the numbers, they speak for themselves,” he said.